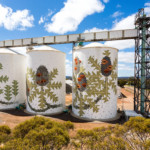 In the heart of the Western Australian wheatbelt region, radical expressions of art have transformed grain silos into art galleries, and small towns into destinations.

In August of 2016, Fremantle artist Amok Island was given 31 days and the biggest canvas in the small Western Australia Wheatbelt town of Ravensthorpe to create a traffic stopper. As a result, three CBH Group grain silos bear a mural of the town’s famous banksia wildflowers. While Ravensthorpe has flirted with mining over the years – BHP Billiton spent a turbulent year in pursuit of nickel in the late 2000s – the local wildflowers are a constant affair, blooming every year from August to November. Now, Ravie’s banksias are in bloom all year round. And they’re 25 metres high.

Silo art trails have popped up around Australia as the hot new way to see the countryside and get a culture fix at the same time. The Australian road trip is a dream we’ve exalted to almost sacred status but the reality is that, between spectacles, there’s often a whole lot of nothing out there, so to see something – anything – counts as a win for many day-trippers. Even a tumbledown shack can be cause for excitement in the furthest reaches of the outback, so you can imagine the kind of consternation the sight of an intricate and evocative piece of art splashed across the side of a concrete juggernaut would inspire among those fresh from the two-tone Nullarbor Plain.

In 2015, as part of Perth collective FORM’s festival of art and ideas, international artists Hense (USA) and Phlegm (UK) created Australia’s first ever silo mural. Eight grain silos in the town of Northam were transformed into towers of colour, and sirens for passersby.

In the years since, FORM has extended the experiment into a self-guided art trail that runs across seven towns in the Wheatbelt, from Northam, an hour and a half east of Perth, to Albany on the south coast, and even out to Merredin, on the cusp of the goldfields. Initially, it was hoped the silos would cause drivers to stop for a better look, and in the process, bring new life to towns slightly off the beaten tourist track. An unexpected side effect of FORM’s venture has gone one better: inspiration has emerged from the towns themselves.

An hour and a half north-west of Ravensthorpe, two boys cheer on their friend as he grinds his skateboard along a railing in the small town of Newdegate. Immersed in their tricks, they don’t pay any mind as our bus pulls up across the road from the skate park.

At Newdegate’s edge, Perth muralist Brenton See’s bold interpretations of the region’s wildlife – the western bearded dragon, the malleefowl, the thigh-spotted tree frog and the red-tailed phascogale – tower over us as the setting sun swiftly casts its lengthening shadow across the town. 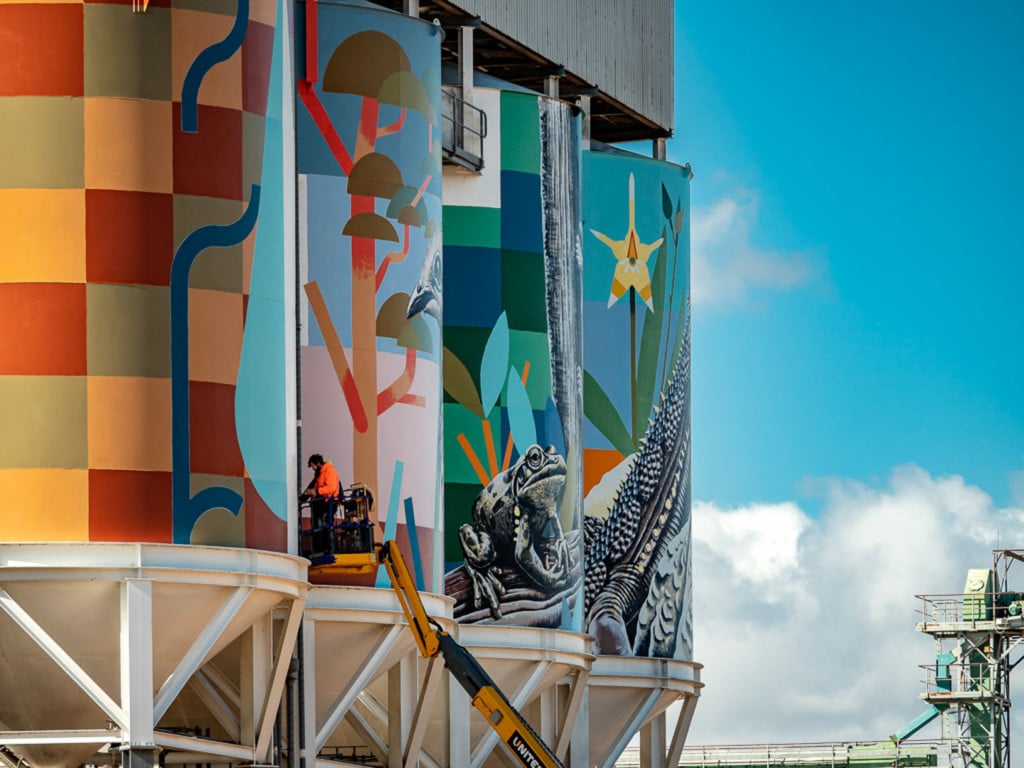 The animals are rendered in black and white, but the backgrounds are an explosive burst of colour. Back in town, the skate park clashes in a similar way. Spearheaded by the community and professionally designed by Skate Sculpture, the park is just one of the small but crucial additions that have popped up in the wake of the silo trail. The Happy Little Caravan food truck is another, emerging to serve both the needs of a small town and any tourists that stop by.

At the tiny town of Pingrup, 40 minutes south-west, I’m sitting in an artisan cafe seemingly ripped straight from the laneways of Melbourne. My lime milkshake arrives in a biodegradable cup complete with paper straw. There’s no Red Bull, no Mrs Mac in sight. If I’m this shocked, I can only imagine how passing truckies feel.

“The silos inspired us,” says Stephanie Clarke-Lloyd, manager of The Store Cafe 6343. When the silo trail came to Pingrup in 2018, Miami street artist Evoca1 channelled the town’s spirit with eloquence, simplicity, and 230 litres of paint. The visualisation of Pingrup’s agricultural heritage – a dog on a tractor, a horse and jockey, and a man cradling a lamb – spurred the local community resource centre to revitalise the town’s disused cafe. Much of the menu is comprised of family recipes, and there’s a strong focus on fresh, local produce.

“Everything here is locally sourced, or as local as we can get, even if it means driving a long way to pick up certain supplies,” Steph says. “It’s just the way we want it to be.”

The cafe’s guestbook reveals a steady stream of satisfied visitors from around the state, around the country and around the world.

“Ripper food! Will stop every time on way to Albany! 10/10,” raves Leo from Sydney. Grace from the UK celebrates the “great vibe”, while another patron simply offers “What a surprise!” along with a sketch of their truck. 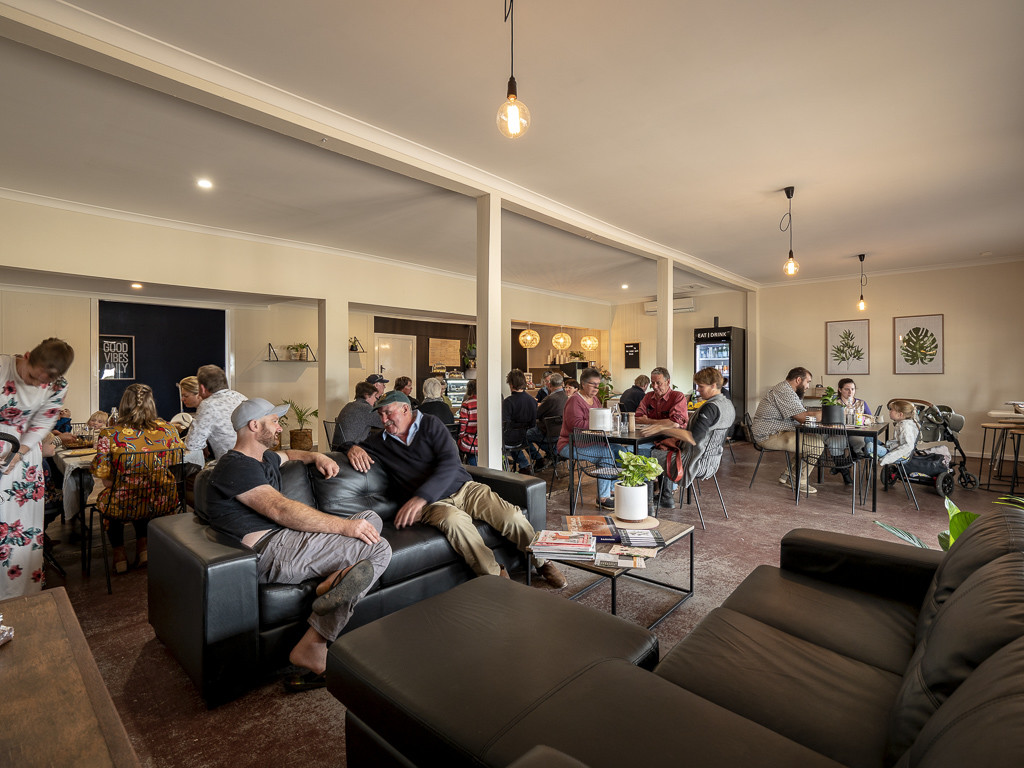 The Store Cafe 6343 in Pingrup, where the community and visitors

On the road to Northam, we pass an unpainted silo site. At this point, it’s a strange sight to see them so clean, so quiet. That silence serves as the voice of the nearby community. Did they not want a mural here? We drive on.

When Northam arrives, an overcast sky hangs above 16 38-metre-high silos in the centre of a working grain station. The leftmost four silos depict Phlegm’s trademark fantastical flying contraptions, while to the right, Hense’s territory is marked with Day-Glo colours and eclectic textures. The eight silos in the middle are untouched, for now.

These were the first silo murals in Australia, but their voices belong to the artists. The dissonant designs have little to do with the town itself, but they seem to have acted as a call for new creative energy in Northam.

The Shamrock Hotel, a Victorian-era pub on the main drag, is swathed in a cocoon of scaffolding as we pull up beside it – a canvas of another kind. We’re met by Nigel Oakey, owner and managing director of the Dome cafe chain, who explains we’re actually looking at the Farmer’s Home Hotel. “That was its name when it was first built,” he says. “And that’ll be its name again when we’re done.”

Oakey has answered the silos’ call. When he first arrived, the Shamrock and its 150-year history spoke loudest. Now, Oakey and his team are interpreters, converting the disused pub into a five-star property that realises its history while serving a modern purpose. It’s the same approach he used to great success with the Premier Mill Hotel in Katanning, three hours south.

“We employ a historian full time to research the property, and we use as much of that as we can during the restoration.”

The voice of the town’s past is strong enough, Oakey believes, for the Farmer’s Home to put Northam on the map as a luxury getaway destination. In a few months, he’ll know.

For the grain behind the murals, Albany is the end of the line. It’s our final stop too, and we find ourselves face to face with an enormous ruby seadragon. For years it was nearly impossible to spot one in the wild; the species was first officially recorded in 2016. The mural caused a stir among locals who believed it should have featured the diggers who left the port city on their way to the First World War. Instead, Singapore artists Yok and Sheryo paid tribute to Albany’s newest resident. It doesn’t speak for the community; it’s a silent shout from the deep.

Unlike the other silo spots, Albany is a city. It has a voice that projects from its streets and from within its heritage buildings. The silo had to shout just to be heard above the din. That shout echoes north across the Wheatbelt, along the rest of the trail. You can hear it as the kettle boils in the Store Cafe 6343, as board grinds on metal in Newdegate, and in the squeal of the brakes as the mining trucks return to Ravensthorpe.

Back in Northam, a car with interstate plates hurtles past us as we observe the silos. It’s not the first. But after a moment, the car slows and pulls to the side of the road to have a look. They must have heard it, too.

The Public Silo Trail is a self-guided driving tour that can start and end wherever you’d like. Northam is the closest to Perth, an hour and a half drive’s east. 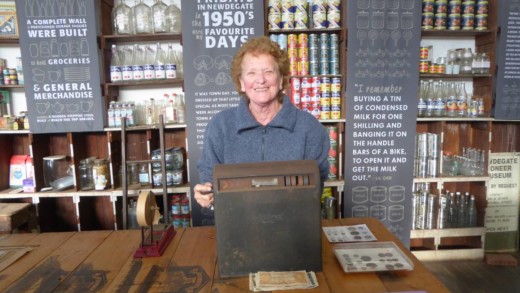 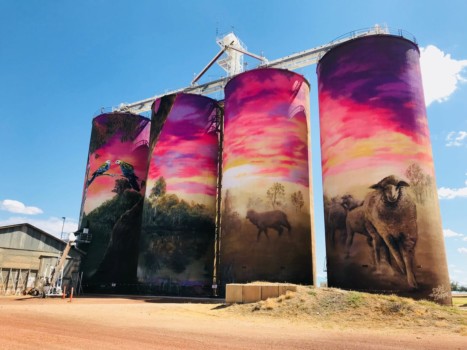