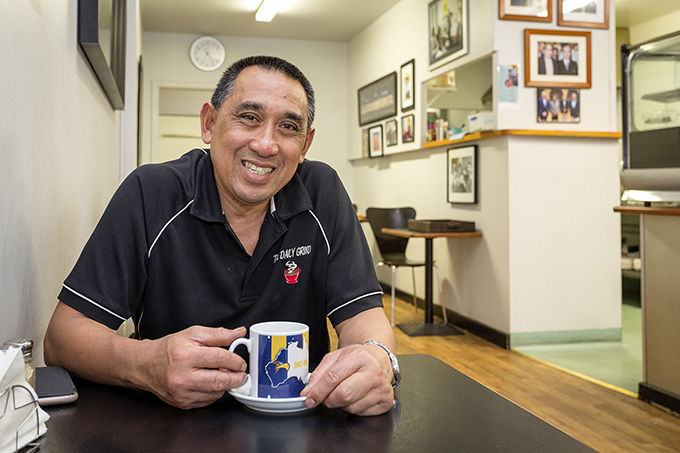 I was fourteen when I came to Australia with my Mum and Dad. We were resettled from Christmas Island, where I was born, to Australia, and it happened to be in Katanning. I’ve been here ever since. The majority of the Islanders that came to Katanning were from the Cocos Islands, via Christmas Island. On Christmas Island, there’s nothing but a piece of land and the ocean stretching away for miles. You’re thinking “Where is Australia? Where is the rest of the world? Is it just us here on this island?” There were no aeroplanes. There was no television: just sun, sky and ocean from morning until night. That was my daily life for fourteen years: not knowing there was another world out there. Then you find out there’s another piece of land that’s even bigger than the island; and here we are on it!
I am the eldest in my family; I have two brothers and a sister. After I finished school I wanted to pursue further  study like college or university, but Mum and Dad couldn’t afford it. So I started work in the meat industry. In the office, as a payroll officer. I think from the beginning, when we  arrived in the 1970s, it’s been about the people rather than the town itself. The spirit of Katanning is one of tolerance. If you go into someone’s house, you should treat your host’s house as you would your own house. The Islanders have shown that goodwill. They’ve come to a house where nobody knows them and they’ve  needed to show the right manners and act the right way. Respecting the culture of other people we didn’t know and learning along the way. We have our own culture and values and religion but we need to respect others. I always say to my kids: “there are three principles in life: trust, honesty and loyalty.” Loyalty to community, it doesn’t matter whereyou go. The Islanders have been here thirty-four years, and we live in harmony with all the other cultures in Katanning by respecting one another.

This land has given us such an opportunity. I met my wife here. She was born and bred in Cocos but I met her here. We were young; I was DJing at a dance and when I saw her I said to my best friend: “that girl over there, one day, I am going to marry her!” We have raised four children together; three girls and a boy and five grandchildren. It’s a blessing. Now I am a leader of the Islander community and the mosque. I am a husband and a father. I am a grandfather. I was a Shire Councillor for many years. I never asked for it. I think I just had a sense of responsibility. If deeds that I do for others benefit them, that’s a good thing. I find that pleasurable. Although I am the Imam of a mosque, I’m still listening and learning. I have a mentor who is not a Muslim. It’s a husband and wife that come in to our store, The Daily Grind, often for coffees and toasties, and I listen to them. They’re not of my faith but the values they have are the same. It’s not easy being a leader. Sometimes it’s lonely. I miss my children, but as long as my phone isn’t ringing, I know they’re happy. I think if we can equip our children with knowledge rather than wealth we set them up better for life. Along the way I’ve been a hardware store manager, and twenty years ago, I
had a restaurant called Alep’s Malaysian Restaurant, and another one in Bunbury. That was growing fast and furious for a while. I started thinking I was going to get rich and retire at fifty! It didn’t work like that; when you’ve got kids to look after and the tsunami of issues that relate to business. But I never had an education, or a diploma in business. I got by asking friends; and asking questions, and just learning. The formula is be patient, and listen. I listen to people and then correct things that don’t work. My days start at the mosque at four AM every day, and then I am at work at our store by four thirty AM. Fishing is my meditation. All is well as long as I go home with fish otherwise my wife tells me off. But I’ll sleep on the rocks before I go home empty-handed. Even though my children have grown up and left to make their own lives, Katanning is my home. It’s always been my home. You  could build me a big Taj Mahal on the Swan or in Joondalup or Albany or Mandurah—but this would still
be my home. Where people greet you, say hello to you. Where people say “How can we help you Alep?” That’s home. It’s a value you can’t buy. People respect us. There are twenty-five nationalities living here and there is no discrimination. There are no other words I can use to describe Katanning. I once sat on a table with the Prime Minister of Malaysia, the Ambassador of Brunei. I asked myself “Who am I?” But you see, you take Katanning with you to the world.