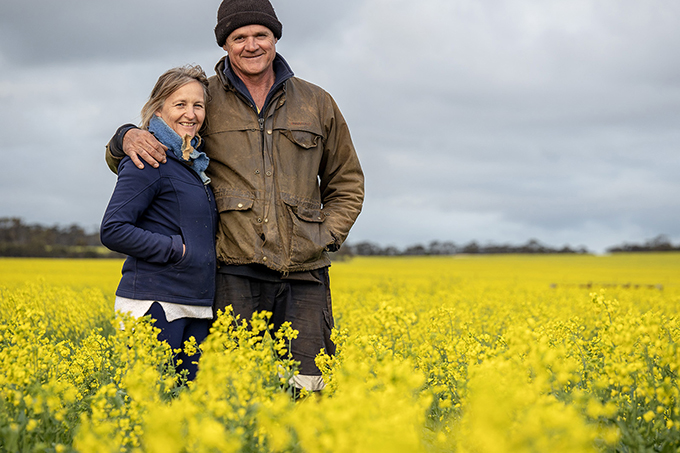 Ashley: We live in Lake Biddy, have done for two generations. My grandfather came west when it was all being opened up, to make a new life with a horse and cart. These days we farm canola, peas, lupins, wheat, barley and oats. It’s always varied, every single day is different. So you’re always learning, always changing. Depending on the year, whether we’re spraying or seeding or harvesting, we generally work the daylight hours, and it’s nothing unusual if we’re doing shift work at night. Weekends don’t mean as much to us as what a weekend means to someone in a nine to five job. When the work is there, we do it.

Fanny: We have three girls. And I believe that all the girls should have the opportunity, if they wanted, to farm. There’s no reason why your daughter shouldn’t have that opportunity as much as your son. I hope that our daughters have taken that example from the women around us; that you can get out and do whatever you want to do. Farming has changed now and there is more opportunity for girls to be actively involved in the operations and management of the farming business.

Ashley: A lot of the women here can do just as much as a man anyway. But I guess it’s getting the opportunity. It used to be that the first born got the farm. Then a lot of the boys left here and went to the mines and now some of the girls are coming back onto the farm. There are no farming people I’ve met so far that don’t have women very much involved, at least in the management side of it. I know that no farm would survive without the input from both, because it’s just so much bookwork and technology and load that you’ve got to share. And the decisions you make, you need to get as much advice as you can, as well as bouncing around amongst yourselves. Speaking of trailblazers, my mother was a pioneer and a trailblazer. I remember her telling the story of her and her friends charging into the main bar of the hotel, back in the 1970s when women weren’t allowed in. The ladies used to have the bar out the back, which was called the “lounge”; a little pigeonhole they shared with their children. But they stormed the bar, a group of them, and that was that. They were doing it all over Australia at the time, but Mum was one of the trailblazers in Newdegate.

Fanny: I wonder if having a really strong community makes a big  difference to people’s decision to come back? Our girls said just that; that they want to be involved. They love going to sport, belonging to a team, belonging to a town, and they love participating in things like the Machinery Field Days, where they’re actually doing their bit for the community.

Ashley: Unfortunately, machinery prices are just exorbitant, a harvester will cost a million dollars. Now, to buy one of those machines, you have to put a lot of crop area in, and the trend is for farms to get bigger. On our farm, we’ve absorbed five families. Then on top of that there’s corporate farming coming in little bit further east. Get big or get out. It’s a bit of a catchphrase. There are other farms out east that are three, four, five times that size. It’s amazing how big the farms are. It’s a bit sad that yes, they’re big farms, but there aren’t a lot of families in that area anymore. When you’re farming, it’s really hard to shut down and take a day off. You can work seven days a week, but you have a drought, and you think, well, you’ve just blown two or three hundred thousand dollars for that whole year; you work seven days a week, perhaps you could have worked five days or six days and had a bit of a life? You still would’ve lost that money, but you’ve had a bit of a life. But we have good years when you get some fat in the system to absorb those sort of years. We’re aware of the risk, we’re not naïve to the risks involved in farming. We are gamblers, there’s no doubt about it. We’ve absorbed a lot of families in our farm, and that’s what’s happened across the board. A lot of the smaller farmers are gone, simply because the costs are so high, and you’ve just got to put more hectares in to be able to pay for the operational and machinery costs. It’s staggering to think my grandfather had a horse-drawn harvester, whereas we have one that takes off four-hundred tonnes a day. It’s just crazy the leaps and bounds that have happened in technology, agricultural handling and agronomy. They didn’t have the agronomists or the people at their fingertips that we have today to help us make all the decisions on the farm, back then. It wasn’t so critical, I guess. People didn’t have a lot of money, but it didn’t matter. Farming was a way of life a lot more back then than it is now; now it’s a business. I think we need to instil in our children that you can work flat out seven days a week, but you need to enjoy what’s around you.

Fanny: It’s a changing landscape, and you’re part of it, and you’re creating it in a way. I fell in love with it instantly. It’s quite a romantic life with the space, the animals. You’re so close to the history of the place. You go out into the bush and it’s timeless. It’s probably that same feeling you get looking up at the stars; it’s that sense of realising where you are in the world. Ashley: It’s a good honest profession,farming. There’s something about planting grain, putting grain in the ground, and watching it grow, and then harvesting it, and knowing there’s all this food you’ve produced for people to eat. There’s a new drop of lambs that come in every year, and you’re looking after and nurturing them for a six to seven year period.

Fanny: You can smell lambing, before you even arrive in the paddock. Your equipment is things for fly strike, a calcium-glucose pack to give them a sugar hit if they need it, and you take a gun, that’s the other thing you have to take. You’re trying to do the best that you can do, and you’re trying to do the best for your animals. You go around and see all the new lambs, and sometimes you see lambs on their own, and it’s really sad, and you try and get them back into the mob and hope that they’ll mother up. As they get older you see all these little lambs gambolling around and having fun. You are driving around scanning the paddock for any sheep that are down; they sort of look like brown boulders in the stubble. Sometimes you might have to help deliver a lamb, it might have the wrong foot out or the shoulder back, and it can be testing. But it can be really rewarding, too. This year there was a ewe down, and the lamb was partially out. And I delivered the lamb that was half out, it was still alive, and I put it in front of her nose, and I watched her sort of smelling it, connecting with it, licking the membranes off it, and the danger is that they just get up and take off and leave their lambs for dead. But she did connect, so that was really beautiful.

Ashley: Once you’ve been here a while,you see the change of the seasons, you see a lot of migratory birds and things coming, you have the wild budgies come in certain time of the year, and have those lime-green smokers that come down from up north. At Lake Stubbs, when it’s full, you walk down there and see all these species of ducks you’ve never even bloody seen before. I love the bush. It’s nice to be in amongst timber and trees, to be able to go out amongst all that natural bush, within ten minutes.