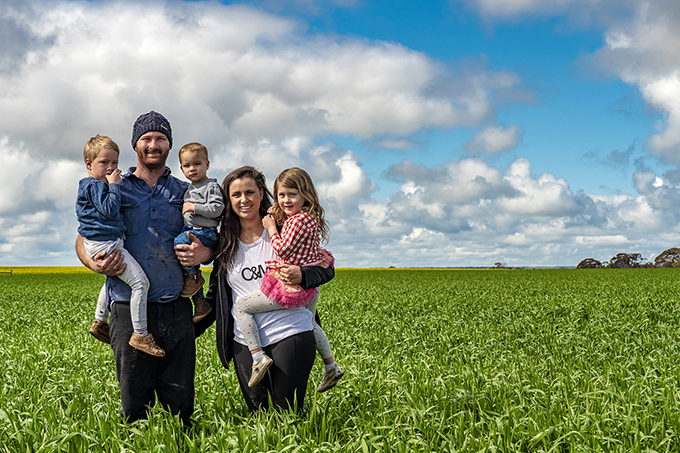 I’ve been here all my life. On a family farm. I pretty well grew up in Pingrup, or twenty kilometres south. I went away to boarding school, but I came straight home and I’ve worked the family business for fourteen years now. It was always the plan. I’ve always had it in my blood. When I was younger, I was always helping my Dad out. I’d say I was most likely annoying; I’d follow him around like a shadow! I’m third generation now, my Dad’s parents were from a sawmilling background in Boyup Brook. In the 1960s, more or less all the logging came to a bit of a halt and they started looking around at farmland, which is how they settled on Pingrup. We run a few sheep, not many though. We’re pretty well all wheat, barley, canola, beans and peas. You might as well say we’re ninety-five percent cropping. My wife Mardi and I have been running the business together now for six to seven years. We’ve been given a good opportunity, running the business, and my parents are still a part of that. Whatever we’re growing, we’re trying to find out exactly what it’s deficient in nutrition wise; what it needs to be given the capability to grow maximum yield for our area. We’re trying to think out the box, doing a few different things to help be more sustainable and profitable, as well as give our kids an opportunity for when they come along too, so they are able to continue on if they like.

We’ve been steering away from certain chemicals, trying to build a better soil biology. If you have good soil, you’re going to have the best opportunity to grow a good plant. Everyone has got issues with soils, and in my eyes, it’s a matter of finding out ways to improve this, trying to get that right. As farming technology keeps improving, we’re seeing different things come to light, that there are problems in  certain areas that need addressing, and people are definitely starting to see this. We’re trying to get onto this early. If we keep using the current practices, we’re going to miss out on yield potential, as well as, long term, leaving the farm in a hell of a mess when our kids come back to make their mark. The Pingrup Races are an awesome day out. They’re most likely one of the biggest days in the town. The shearing hand-piece in the centre of town is meant to be the largest in Australia. It’s on the main street where we used to have the Pingrup Shears, a shearing competition they held the day before the races. It was speed shears, a competition for who was able to shear a sheep the quickest. This has come to a bit of a halt now, as a lot of the people in the area have gone predominantly into cropping. The community is definitely getting smaller. Farms are getting bigger and more automated, so a lot of people have left the area. In the past, Chase the Ace was on a Thursday night at the pub. It used to be a massive night, everyone from the community would get behind it. Your pub in a country town is a bit of hub for people to come to, have a drink, spin a yarn. We’ve had a lot of good times there. At the end of the day your community is what you make it, and fortunately we have a good group of people in Pingrup who are very community minded and keep the town alive. I try to help out where I can,  but Mardi, she kind of does my share in the community. Mardi and I, we work well together, we’re a good team. We’re passionate about what we do, and we both have the same goals. I was only talking to her about this the other day, and I said “if you guys weren’t here, I wouldn’t want to be either.” You need to have someone who’s heading in the same direction as you. I’m pretty lucky to have that. I try to spend as much time as I can with my family before I go to work each day. The boys came out with me for a couple of hours this morning, Indi was at Kindy, otherwise she would have joined them too.