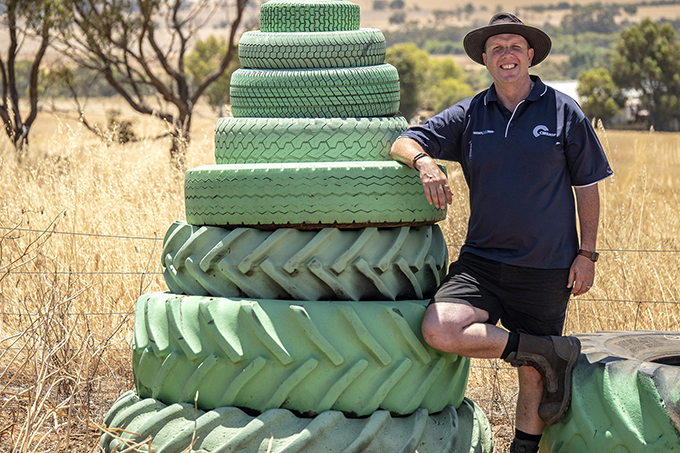 I live on a home farm in Southern Brook, which is about twenty five kilometres east of Northam and consists of a hall, some rarely used tennis courts and a disused golf course. The population, officially, is probably zero, but the community is made up of surrounding farmers, so at the Christmas party, you’d probably get up to a hundred people.

I’m from here, born and bred. I did all my schooling years in Northam, on and off, but then I worked away. I was in agribusiness finance so I travelled mainly around the State. I always wanted to work regionally but it was really, really important for me to come home. There’s a long agricultural history in our family. My grandfather and his brother came over from South Australia, where the original Antonio homestead is still standing. They had one of the first Clydesdale horse studs in the State, and at one stage early on, they grew half the State’s barley crop, carting some of it down to the old Swan Brewery for processing.

Five or so years ago, I did my tree change to come back home. I don’t call myself a conventional farmer, but I’ve always done the books for the farm. I couldn’t do what I do if I didn’t have my partner in business, which is my brother, or my partner in life, which is my wife. My brother Paul is a great farmer. He’s a self-taught engineer and a mechanic, so he does the bulk of the operational stuff, and I’ve got a business background, so we don’t compete with each other, because we’ve got different skills, and that makes the farm all the more successful.

Nicki a registered nurse, she does specialist care. We met through Rural Youth, which is a massive social organisation of originally, young farmers. I was eighteen, she would’ve been 16 when we officially met. There was a convention we were at, and Nicki came up to me and said ‘You don’t know my name!’ – because I’m not always best with names. I said ‘it’s Nicki’ and she said ‘Oh’. She said ‘You don’t know my surname’, and I said ‘it’s Whitehurst’, and she said ‘Oh’. So she knew I was paying attention. I passed the test.

I’m doing sessional lectures for Charles Sturt University at the moment. With my background in farming, banking, and insurance, they thought I’d be a good fit to teach a third year subject in risk management and I was lucky enough to be elected President of the Northam Shire. Being a community person takes a lot of time, especially the President of a Shire the size of ours. But being away, you get to see Northam grow from afar. There’s so much talent here, and you might not know it’s there. That’s part of coming back. I see my job as creating an environment where all our hidden talent can thrive, and people can achieve what they want. They don’t have to be in a city to thrive, they can do it here. We’ve got a university campus out here, they’ve got the option to stay. If we make it a good place, people stay and people come back.

Agriculture is still the biggest economic influencer, but Northam’s not a traditional agricultural town like you’ll find in the smaller municipalities throughout the regions. There are a lot of other industries in Northam as well. Here, some of the bigger farms have broken up and you’ve got hobby farmers coming in, and they’ve got different ways of generating income. They either have an off-farm job, or they run horses, or this is retirement. On the western side there’s a lot of FIFOs, Northam’s perfectly situated for that. You’d be hard pressed to find anywhere else in the State that has a community like this one. You’re getting the right people driving things here. There’s a lot of private development happening, from the Commercial Hotel that’s being redeveloped to the new Dome to Laura’s Wine  ar that’s been opened by a State renowned architect. Probably the last time there’s been a boom like this was in the late 1800s, when we were a staging post for the mining community.