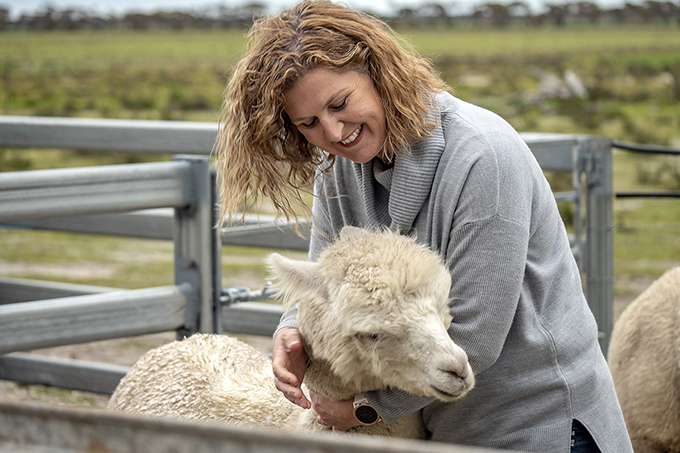 I live a kilometre away from where I was born. In Pingrup. I’ve been here forty years: my whole life. I’m fourth generation. My great-grandad came out from England looking for land and a new way of life. I suppose him and his twelve-year old son just walked from Dumbleyung and went “this is my patch!” We still have that property but we’ve expanded. The farm I’m on is next door to the original family farm, it’s still part of our property now. I’m a stay-at-home Mum and farmer. We do sheep, not so many now but some, and wheat, barley, and alpacas. Our farm’s not very big anymore, we downsized a couple of years ago, so I help Mum and Dad out. But previous to that I worked for CBH and I’ve been an assistant bank manager. I went away to university, did my Bachelor of Business and came home. My partner is a farmer, but he’s actually from Denmark, Europe. He originally came out here as an Ag Exchange; we met and he stayed. That’s always our joke; that I had to marry someone from overseas because I was either related to or went to school with everyone here. But we’ve travelled a lot, and we still keep coming back, we’re still here. So it’s my choice I’m back here, I didn’t “marry back into my hometown.” I chose to be here. Helge loves the open space. Every time we go back to Denmark, he goes “God, it’s getting smaller.” He was a carpenter by trade, but he now works full-time on a farm over in Nyabing, and we’ve got two little boys.

I’m a volunteer ambo. We’ve got a self funded group here, under St. John’s, but every piece of money we have we have to earn ourselves. There’s a small group of us but we’re highly trained and hopefully we provide a service that rivals anywhere else. We’re lucky, we don’t get too many callouts; we’re not in a fatigue zone, so we don’t have the traffic accidents that other communities have. I do it because someone has to. But we’re a little family. No matter where you go, if you see another ambulance officer, you just say “G’Day” to them, it’s its own community. I suppose because our community is getting smaller, you look for other communities to connect to, even though you’re within your own. It’s the same with sport. Pingrup community has lost things. When we were kids, Pingrup had its own footy team, netball team, hockey team. We don’t have that anymore. I still play, we joined up with Lake Grace, but it’s still not the same as it was. I was part of the inaugural hockey team over there, and my Mum was part of the inaugural hockey team here, so it’s in our blood. But our community getting smaller and smaller that’s probably the real struggle; keeping it alive and interesting for people to come here. There’s plenty of work, but then of course you need work for the other half of the family. That’s why opening the café was important. It just means there’s a service here, something that a family can come to and have a break.Conversely though, it’s the community here that I love: the people. Otherwise, why would you be here? It’s just like most communities, it doesn’t matter how old you are. You’re all just friends and you’re all in. So I think that’s what I like about my kids growing up here, they grow up with different aged kids, they learn to look after the little ones. It would be nice if our  school was just a tad bigger. But a few babies are on, so we’re slowly getting bigger.