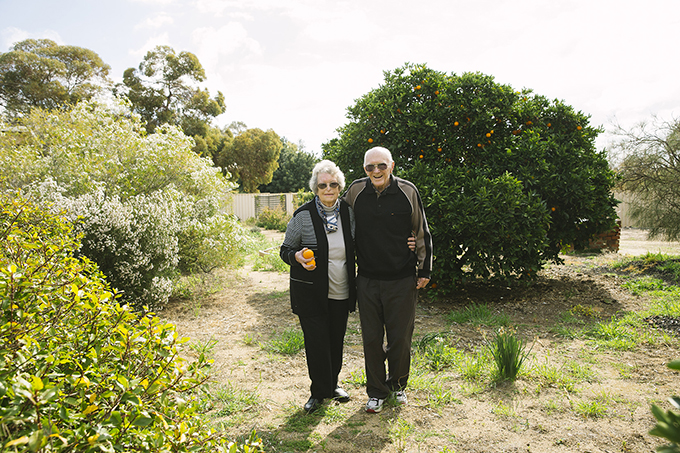 Margaret: I was born in Merredin, so I’ve been here eighty-three years. My parents ran a newsagency in Bates Street until 1960, when Eddie and I took it over. Merredin used to be a real railway centre. All the spur lines used to come in to Merredin and all the houses along the highway were originally railway homes for drivers and guardsmen and railway staff. Of course then modernisation came in and it just fizzled out. They use road transport now. A lot of the drivers went to Perth and that was something of a downer for the town because in our day they would get their wages every fortnight and they’d spend it in the town. I’ve been involved in many organisations around Merredin over the years. I’m a life member of the Merredin Golf Club and the Bowling Club and most of our retired life has been spent doing voluntary work for different groups.

Eddie: I’ve been here sixty-three years. I was born in July 1923 not very far from here and spent my early life at a
place called Dangin, near Quairading. I am a twin and was brought up on a farm there. After school I worked for the Commonwealth Bank for twenty years apart from four years’ service in the Second World War. I joined the army in 1942, when I was only eighteen. At that time practically everyone was joining. A short time after that I was sent to New Guinea where the Japanese were. I spent two years of my service up there. I was there when the Japanese landed. I think I am one of the very few survivors left from the Second World War in Merredin. We retired many years ago. The old newsagency is still there. It’s the hobby and gifts shop now. After we retired and started taking life easy I did a lot of voluntary work for various committees. About ten years ago I was awarded what they call an OAM: a Medal of the Order of Australia, in recognition of my community work. I’ve been secretary, treasurer and auditor of numerous organisations. I’m a Justice of the Peace and I’ve been very involved in freemasonry. It’s kept me busy ever since we sold the business. It just sort of happened. People come along and want community members to get involved in organisations, so you go with the flow and got more and more involved. I don’t do much these days though.

Margaret: We’ve slowed down quite a bit over the last few years. We’ve got three daughters, they’re all married  now and we’ve got nine grandchildren. They’re well scattered all over the country; and all the grandchildren are all scattered around the countryside. We recently became great grandparents for the first time!

Eddie: If you go to the big cities these days you’re only a number, I feel. Here, people think about you if something happens. If you’re sick they want to know how you’re getting on. The only problem is when the children get to a  certain age they leave town so then of course some of the sports teams suffer a bit. The children that have got to university age, there’s not much for them here. But other than that we’re happy. The only way that we’ll leave here is in a box I think.