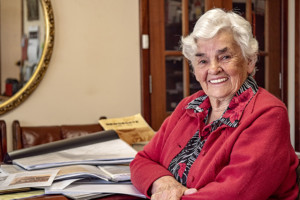 I lived on a farm outside Newdegate with my husband David since 1957 but I live in Newdegate town now. My sons are on the family farm, since my husband and I retired. But I’m eighty three and still surviving reasonably well. I still have a whiskey at night and carry on.

I came out here first when my mother remarried. I was three or four. When I grew up I worked in nursing; I was a nursing assistant. I’d been to Port Hedland and Perth and Cunderdin and Lake Grace but came back and settled here and David and I were married in 1957, when I was twenty three. When we started off, David and I had three hundred sheep, and we could put in about a thousand acres of crop. My son’s put in much, much more than that, but when we started we had sheep, wheat and oats. It wasn’t an easy transition to farming for me. Because if you’re nursing, you don’t do any cooking. You just know how to put a sticky plaster on! But we built our own house, and we had the carpenters all come and stay, and I had to cook for them. I had never done any cooking. My mother was a good cook, but I only ever turned up for odd meals when I ever came home. So that was funny – though I don’t presume it was terribly funny for those receiving the food. Every night we had to go kangaroo shooting for the builders, and everybody’s in whatever car we had, travelling over ruts and mallee roots, chasing kangaroos.

We were very lucky to be living here in very interesting times. We saw good times and bad times, but we have seen massive changes in the time that we were on the farm. When we first started, there was a huge development when the Premier, Crawford Nalder, opened a million acres of land in one year. It was possibly a disaster, but it served a lot of purposes. They allocated the land out to cooks, taxi drivers; anyone could apply to get a block of land. This provided opportunities for local farmers with contract work but there were problems associated with that because a lot of people had no idea of the cost of clearing land and bringing it into full production. Other experienced farmers from outside the district knew what was involved and are still here today. One of the biggest problems was the clearing, because a lot of people had no idea how to clear land, and they’d be burning everything in sight. Every summer the men would be fighting fires after dark. New people have come and there’s been a massive change of farmland around the place. We’ve had an enormous amount of professional people come out of this district too, it’s unbelievable the amount that have gone on to be doctors, dentists, lawyers and mechanics etc. It’s just great to see. We have a small school here, which goes up and down in various  numbers.

Some of the biggest changes in my time have been in machinery; massive changes in machinery and massive changes in the amount of people here. When we first came, we only had two thousand acres and we were employing up to three and four men, and all the farms were doing the same. Now, with the machinery they have, they don’t require that amount of labour, and you take that amount of people out of a town, that’s a massive reduction, isn’t it? With that goes, of course, wives and children. Farms have just got bigger and bigger, and less and less people run more and more land. My family look after me very well. My grandchildren are continuously in and out, which is really lovely – my children and my grandchildren. David and I had four children. The eldest one’s Geoff, and then Julie, Vicki and then Ashley; Ashley’s the youngest one. His wife, Fanny, is lovely, she’s English, and she’s just moved into farming as if she’d been doing it all her life. My husband has passed away now. He had Alzheimer’s, sadly, for about the last ten years of his life, but he was in what was the Farmer’s Union originally, WAFF, and the National Party, and he was a Shire Councillor for nine years. If you’re out here, you’re really better to be involved. The more involved you can be, the more content you are. If you’re not involved, you could sort of feel a bit isolated, I think. I think that’s the beauty of it – everybody makes their own fun here, and everybody goes to everything and gets involved. I think the development of our Field Day was one of our greatest local stories; the first Field Day was out at Lake King to raise money for an ambulance. It was only very small at the time – a few tractors – and then they raised money to build the church, and when that chap who first organised the first Field Day at Lake King moved on and no one wanted to take it on Wally Newman said ‘why can’t we have it in Newdegate?’ So we started it up in Newdegate. So our local men took their machines up, and we got machines in, and from then on it doubled, and quadrupled, and kept growing until it became what it is today. That’s been a great landmark for us.

I think that Newdegate is a marvellous place for children to grow up, because they’re healthy, wealthy and wise, as it were. They learn to work from when they’re little. Because they’re out in the sheep yards, and they’re going with Mum to drive sheep, and they can all drive by the time they’re about five. The sooner they can learn, the better. They’re out in the paddock doing it and as safe as can be. In emergencies, how good is that? They learn to handle dogs and animals, and when they go to apply for a job, they’ve had work experience.  They can turn their hands to various things. I think just about everyone that’s applied for an apprenticeship from here has got it. That has to be a recommendation to start with, doesn’t it? I just think it all starts in the family, children on the farms are with the family from day one; they’re not parked off in childcare. Newdegate has been good to me. I’ve got the option to go into Perth or into Hopetown but the thought of living in Perth – I’m there for two days and that’s enough. You can still live here safely and comfortably, and to me, I think it’s a pleasure. At the moment I’m very happy with my lot, as it were. I think that’s what you’d say.