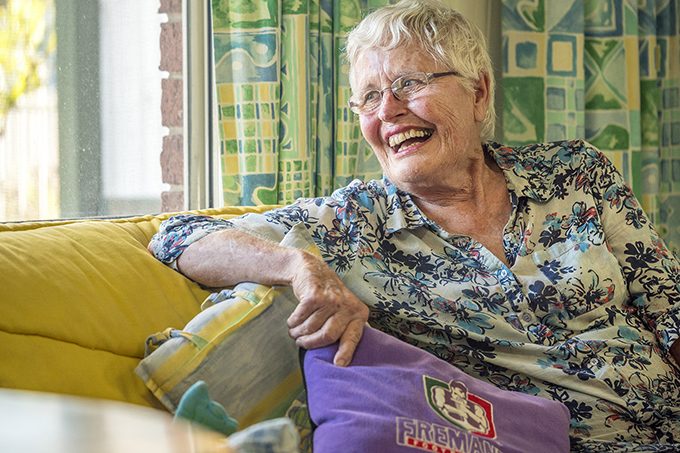 Most mornings, early, I have a swim at Middleton Beach. I open my front door and if I can hear the water roaring I  don’t go down, because I am eighty-two and it gets a bit hard to get up when you get knocked over by the surf at my age. But I didn’t learn to swim until I was sixty, when I left the farm.

As a young girl finishing school, I got a scholarship to Teacher Training College, and I tore it up and threw it in the dam. All I wanted to do was go home  and ride my horse and be a farmer. So that’s what I did. My husband, Haydn, and I came out from New South Wales when the Western Australian Government opened up the virgin land north east of Albany. It was golden opportunity, the criteria being that we had to settle the land within two years. Haydn and I were married in June of that year – we were twenty – two – and set off on our great adventure in September with, I might add, very little money and lots of shock-horror from all our friends and family. We towed a caravan across the Nullarbor with our nine-year old Ford Mainline utility. Kojaneerup, where we settled, is approximately a hundred kilometres north east of Albany. My first impression when we arrived was what a huge sky, with the beautiful Stirling Ranges silhouetted against the skyline and large areas of scrubland. There was nothing there; no fences, you had to clean the scrub, get the land cleared and start farming. So that’s what we did. Crops, sheep, and we did have a few cattle but it was a bit hard to keep them in.

Our home was a caravan with an old tent on one side to form an annexe, which housed the kerosene fridge and a couple of folding chairs and a table. Every afternoon when the sea breeze came in the tent would collapse in a big sad heap, and if I was alone I would be in a big sad heap too. There was no power, and the first snake I killed, I hit it ninety-nine times! I was in a state of total terror. We used eat kangaroos and all sorts of things, anything we could eat. Until our shed was up I did the cooking on an open mallee root fire. If we were lucky, we’d catch a few yabbies in Kojaneerup spring and cook them for dinner. We used to leave a little note in our letterbox for the people going past on the way to town, and that’s how we all survived. Because they’d do our shopping for us. It was an hour to Albany and the road was terrible, it was just a dirt track. But it just grew from there. Over the years we’ve added more land to it, and my son’s out there now with his family. I was lonely in the early days, with no young-marrieds about. Haydn was away a lot doing contract work, so I persuaded my mother to enrol me in ‘Famous Artist’s Course’. This was to be my birthday and Christmas presents for the next ten years. Every morning while our baby, Jenny, was asleep I would spend two hours in the caravan doing my lessons.

In 1969-70 when wool prices crashed, the Australian wool stockpile was huge and Kojaneerup was having the worst drought in history, I decided that if every tourist left Australia with a pure wool wall hanging it must surely use up some of the stockpile. That’s when I started doing screenprinting, because we needed to make some money. I was going to save the wool industry. The manager of the Albany Woollen Mills at the time made pure wool fabric for the venture and I screen printed wildflowers, Aboriginal motifs, and animals on the little wall hangings. When Haydn was home he stapled a piece of jarrah on top, and Jan Hood Originals was launched!

I was the second white woman to climb Bluff Knoll from the southern side, and the only reason I kept climbing was because I was scared of heights. It was a difficult climb, almost straight up the mountain, and what a sight when we reached the summit! Huge expanses of uncleared land stretching south to the sea. But then I had to come down again! We climbed down on our bottoms. Too scared to stand up.

Eventually, Haydn’s Parkinson’s disease began catching up with him, and the time came for us to leave the farm to the next generation. We moved to Albany, and settled seven minutes’ walk from Middleton Beach. I swim every day, and I love the friendship, the beach, and the community here. The sea beckons every morning and if I walk along the boardwalk I can still see the Stirling Ranges in all their glory: the sun coming up over the ocean here has to be seen to be believed.