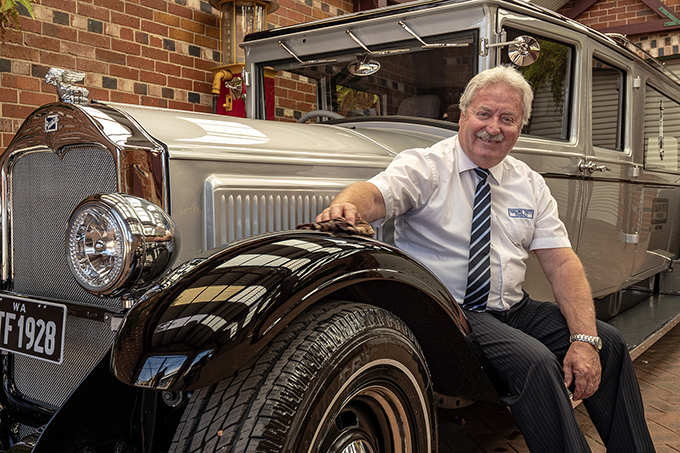 We’ve been in Northam for about thirty three years, though I was born and bred in Kalgoorlie. I’ve had a bit of a varied working life: I’ve worked in an office, on a sheep station, I’ve been a farmer, a retailer at Coles and a drummer in a rock and roll band. We’d moved to town in 1985 with my previous job when, in 1993, I was offered a position managing the funeral home. My wife and I own it now; we put in an offer to buy it off the parent company in 2005, and they accepted. So it’s been ours for thirteen years. I love the work. It’s more of a lifestyle than a job. Being a country funeral director is different to having that role in the city, because it’s just more personalised. We’re on the phone twenty four / seven and most of the people we help out are people that we know. It can be really sad sometimes, particularly when your friends lose children. People at that time and in that State, they just need guidance. We arrange funerals every day of our lives, but for some people, they may only ever arrange one or two in their lives. As a funeral director, life’s unpredictable. We can think we’re coming into a quiet day in the office to catch up on things, and then the phone will ring any minute and we could end up going anywhere for the day;
a home visit or a hospital. We never really know what the day’s going to produce, but we’re very flexible.

Country life is pretty hard to beat. My wife used to play hockey at high school; and when she come to Northam, she started playing hockey again and I started playing music again. Part of being in the country, really, is that you just need to get involved. People learn to put their hand up – otherwise nothing gets done. That’s one of the reasons I’ve got onto local government as a Councillor. I’ve been on various committees throughout the place: I’m a past president of the Chamber of Commerce, the Rotary Club and the Share and Care – but I’m coming up to sixteen years as a Councillor, and in my time on Council there’ve been a lot of changes in Northam. We used to have up to six hundred trucks a day carting anything from livestock to chemicals for the mining industry straight  own our main street. At one time there was a triple-deck stock truck coming down the main street with feral goats on board. It was in the lead up to Christmas, and the Council used to put strings of Christmas lights across the street attached to buildings either side. As this truck was coming down the main street, a billy goat with great big horns got them hooked in the lights, and they just lifted him straight out of the truck as it passed by. Eventually he dropped and they ended up catching him in the toilet at Centrelink. Since they put the bypass in, the Council have done a full revamp of the main street and it’s never looked back. There’s a new hospital, companies like Aldi and Dome have come to town, they’ve amalgamated the Town and Shire, and we have a new Aboriginal Interpretive Centre. A lot of private investment has started comeing into town, which is good, to see that business people have got confidence in Northam.