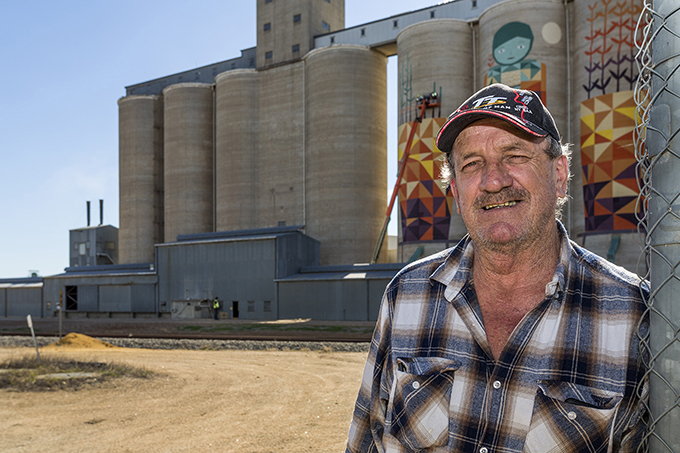 I was born in Merredin. Been here all my life. I left school at fourteen and went to work at Cooperative Bulk Handling. Being a big family – there were ten of us – there was a struggle on with looking after Mum. So a friend who was in charge at CBH got me a job there as a cleaner. They said: “You can start down there Monday, Spike.” I was only a little tacker. At the time I didn’t realise too much what was going on, but because I was only a youngster, when one of the big bosses came up from Perth every fortnight I’d have to have the day off.

I worked for CBH for forty-eight and a half years. I’m their longest-serving employee ever. I’ve had some fun times down there. There are a lot of funny stories. One year we decided to buy some young turkeys and fatten them up for Christmas. We thought we’d disperse them so everyone could take a turkey home for Christmas dinner. We built a proper pen for them: it was five star accommodation! We’d let them out every day and they had free grain. They used to walk over to the office and the shed and they just loved everybody. But one particular day I looked over and saw a bus pull up with all these well-dressed people trying to get off the bus. The CEO must have brought the directors up for a tour, and the turkeys must have thought it was feeding time so we had the directors trying to get off and the turkeys trying to get on the bus. Anyway, I panicked a bit. The next day I got a call from the
big chief down in Perth and he said: “Spike, I am coming up tomorrow. Get rid of those turkeys”. I thought, “no!” So the next day, when he arrived I was waiting for him. He came over to the pen and said “Jones, you got rid of them?” And I said “No, I didn’t and I’m not going to.” And he looked at me a bit and I said “Well, there are eggs
in there,” and so he had a look and he said, “Well I didn’t know about that Spike. Those eggs.” So he kicked a few stones about for a bit and then he said to me “Look, I didn’t know about the eggs. I’ll give you six months and then
you get rid of them.” And I said “well that’s a fair deal.” So he hopped in his car and he went to Perth. And we got our turkeys for Christmas. What he didn’t know was that prior to him getting there I went to IGA and bought a dozen eggs – true story – no GST. I bought a dozen eggs and put them all around the turkey pen. They all had
stamps on them. Certain visitors would come down to CBH to have a look at the silos. As long as they weren’t old people or had crook hearts, I’d go into the lift and put a sign in there that said “the wiring in this lift is a bit shoddy, please do not move around too much. It’s getting fixed next week.” They’d look at the sign and I reckon some of them didn’t breathe the whole trip up to the top of the silo. When we got back down I’d take the sign out. I’d have done that trick fifty times at least. Life’s short and I love mucking around a little bit. I like getting involved, I like talking to people. It doesn’t matter who they are, I’ll say “G’day” and all of a sudden I know people. It’s better than sitting back and saying nothing with your head down.

When I first started at CBH it was steam trains and bag wheat. We’ve gone from there to the big set up we have today. I’ve seen a lot of changes. I’ve done bobcat work, loader work, loading and unloading wagons, filling storages. I could have gone higher, I probably had the ability to go higher but in those days, years ago, if you wanted to go a bit higher in the company you had to go and work at another bin three or four hours away. I was pretty close to the family and I didn’t want to go. So I thought I’d just be an ordinary RPO and that was about it. I was probably lucky to get the start I did when I didn’t know what was going on. I don’t know where I would have been if it weren’t for CBH. I could have been probably a nothing. I don’t know, it’s hard to say.

The railway’s dropped off now, a few little shops have closed down lately but everyone seems fairly happy that if they live here they’ll just try to keep on keeping on and looking after the farmers. They have it rough now and again. They’ve got everything going against them,  everything. But everyone in Merredin’s pretty tight together. Everyone knows one another, we all yak together and we all try to have a bit of a laugh together. My wife is from England originally, she came out here and we’ve had two kids. These days I like getting around, having a yak, being involved. I’ll probably die here; I’m happy living in the country.