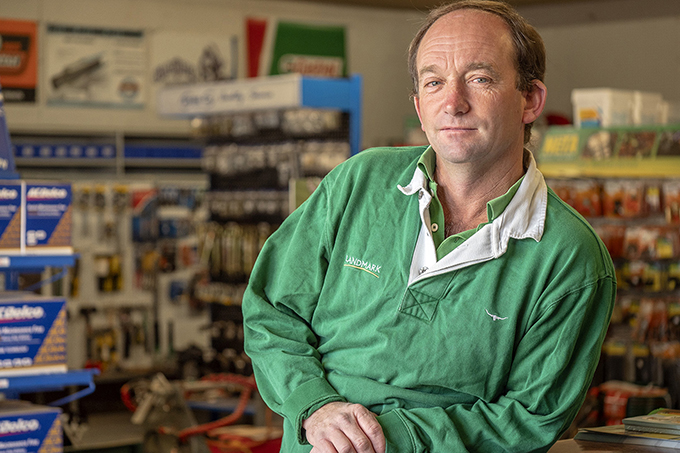 I’ve lived in Pingrup the last twelve years, but this is my second stint in town. I grew up on a wheat and sheep farm in Wyalkatchem, and I have always liked agriculture, particularly the cropping side of things. I studied for a  achelor  of Business in agriculture at Muresk Institute of Agriculture in Northam, and agronomy was one of many jobs you could do after you’d been to Muresk. I’d worked for Pingrup Traders previously, so when the opportunity came up to buy the building and take the store on as my own business, my wife Taryn and I moved back and started our family. Our house is connected to the shop which was quite an advantage bringing up a young family; Pingrup Traders sells agricultural chemicals to farmers. We’ve also got a little bit of hardware and other things to stop people going out of town and getting everything. But the core of the business is agricultural chemicals and selling fertiliser to farmers. I’ll go out and tell farmers what to spray on their crops to get weeds out, how to apply fungicides when there’s disease, and also insecticides for pests. I don’t really charge for the agronomy service that I evaluate out on the farms. My phone always starts ringing about seven or seven-thirty in the morning. I start dealing with farmers and clients then. I could get as many as thirty or forty calls in a day, and most of them, because it’s a small community, are mates as well, so a business call turns into a bit of a chat and it can chew up a bit of time. Taryn works in the shop with me, she does admin, payroll, some of the ordering. We met in Dalwallinu then I was working there as an agronomist. We’ve got three kids now, so she also looks after them, and the house, and me. It’s a good feeling, being able to advise clients and ultimately watching them grow clean, successful, good-yielding crops.

I’ve gone and done a bit of farming myself on the weekends, in the last few years, just a thousand hectares; well, fourteen hundred hectares now. Practising what I preach. It’s gone pretty well. We’ve had a couple of years of frost, which knocked the cream off the top a little bit, but it’s going pretty good and complements the agronomy as well. I’m also a Councillor for the Shire of Kent; President of the Pingrup Ground Improvement Committee (which is basically the sports ground), and the Pingrup Race Club and captain of the Fire Brigade. I’m doing plenty.

I’m probably doing a bit too much, really, but I do enjoy it. Most of the time! The challenges here are mostly to do with food; we don’t have access to a lot in town. So for groceries and things like that, you generally have to travel. There’s no real mechanic at the moment so those sorts of things make it a bit difficult at times, too. But there are good businesses not far away, most of those challenges are fairly easily overcome just by a bit of travel. I like being part of a small community; because you know everyone, and everyone generally tries to get along. A lot of older farmers have moved on in the last ten to twenty years, and their sons have taken over the farm. So there’s been that big generation swing to the younger farmers. There’ve been a few more houses built in town, but there really hasn’t been any other businesses come. We’ve still got the pub, the roadhouse, Salty’s Haulage, and the White Star Engineering business over the road. Pingrup’s a farming community, which is right up my alley. The lifestyle is good here, I enjoy machinery, being on the farm, living and working in this town. Most of the locals are really good people.