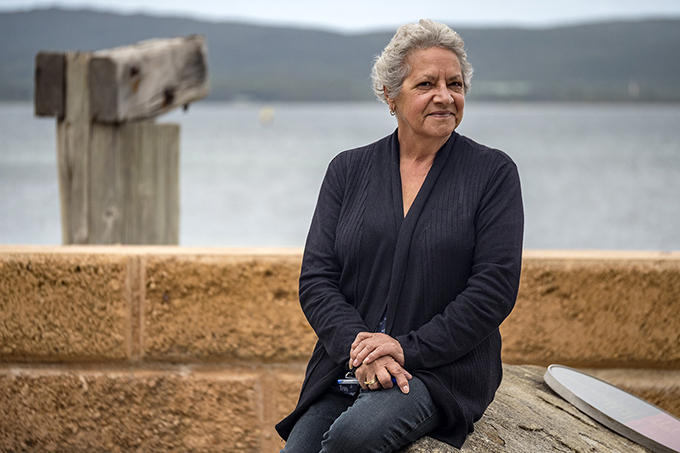 I live about four kilometres outside of Albany, on a big quarter-acre yard with lots of animals. I’ve been away and come back. I’ve worked in the north; in Karratha and Port Hedland for a year or two. I worked in Katanning for a couple of years, but I always came back. I run educational programs with the Museum of the Great Southern. It’s based mainly around Aboriginal stories, getting our stuff out there to the wider community. I do a lot of work with schools, which I absolutely love. For example, we’ve got The Bobtail Program coming out. My son has got a collection of live ones, and we bring them in and tell a little story around the bobtails and their place in nature. We tell them how the Nyoongar people would, a long time ago, catch them and eat them and how we don’t do it anymore. So we do those kinds of educational programs.

My background is in child protection; thirty-seven years it was, all up, in child protection, and I needed a break. Working in that field in the town you were born in is obviously quite difficult at times. We know the connections, we know the children, we know the parents and we know the grandparents. So I decided to just go away for a while, just to get some renewed energy, I guess, before I came back. My Mum was a Carnarvon girl, Stolen Generation. She was sent to the Mogumber Mission. We’re not sure exactly how old she was, but―we think about five. My Dad was born at Nightwell, which is just down this side of the Stirling Ranges. He had problems with his hearing, and he had to go to Perth for his specialist appointments. When he was up there, there was a curfew in place, and so he wasn’t allowed out at night. They actually put him in the same mission that my Mum was in, just overnight, until he could see the specialist, and that’s how he met my Mum. And he obviously went back for more follow-up appointments, and was put in the same place. Obviously this great romance developed and he married my Mum in 1937. The sad thing was when she married Dad, my mother moved, obviously, to live in his country, which meant that she never went back to her own. She was well into her sixties when we finally were able to take her back to meet her family that she was taken from. She  believed they hadn’t tried very hard in all the years that she was away to find her, and it wasn’t until after she died that we were able to get her records. There were all these letters on her file from her Dad. It’s awful.―They had tried and tried and tried to find her.

My mother and father came back to Katanning, which is where my Dad’s family were living at the time, because that’s where most people lived. Katunyanning means ‘meeting’, it’s a meeting place where everybody came together. And then in 1948 my Mum and Dad and my older brother, and my grandmother and grandfather all loved to Albany. I was born the following year, and then five others arrived after that. When I was about sixteen, I read my stars for Pisces, which said very, very clearly, I would either be on welfare or I would work for them. I decided I wasn’t going to be on welfare. So I was lucky enough to get a job, first of all, working in the welfare office, and then progressed into doing fieldwork and studied and got a degree and went on from there. I was in it for a while, I think all up it was between thirty-four and thirty-seven years. For me, I think it was about trying to make a  difference. But also to make a difference about how Aboriginal ways and Aboriginal culture were understood, and education for my colleagues into that.  I was the only one, the only Aboriginal person doing this for a long, long time, and so it was a massive struggle to try and get across to them that we are different; we do things in a  different way; we have a different belief system, and if we, as workers in that field, can’t take that into account, then we are not going  to be able to make a difference. My favourite story about this town is the story of Dog Rock, which is one of our sites. It’s iconic, and at one stage, when  they were building that part of Middleton Road, there was discussion around blowing it up to make room for vehicles, because it was this big rock formation that was going to be a traffic hazard. The town Council at the time decided they weren’t going to blow it up, but they would actually put a collar on it. So they put this painted collar around it. But there’s a secret little group of women and men in town who love to decorate things quite secretly. Overnight, things would pop up all over the place. Public seating would suddenly have something beautiful draped over or around it, parking signs would suddenly have all this beautiful knitted and crocheted work on it, done by this little group that always wished to remain anonymous. And they and myself had a discussion around whether it was appropriate for Dog Rock to have that collar, or  should we put a proper collar in the Aboriginal colours around its neck?  I said ‘oh, I really love that idea!’ Sowe did. He had a collar in the Aboriginal colours around his neck, using these kinds of things. It was actually a big scarf that was knitted and crocheted. That was fantastic. We recently had a hugely successful Aboriginal exhibition in Albany. Yurlmun: Mokare Mia Boodja featured artefacts collected from Albany during the 1800s, which have been stored at the British Museum for the past hundred and eighty years. We worked our butts off to get that exhibition out here, because we didn’t have a lot of time, and we certainly didn’t have the money to bring it out. So we had to get it piggybacked out on another, much bigger exhibition, and we had literally four months from when the British Museum said ‘yes, you can borrow the artefacts.’ It was hugely successful. The first of its kind. We were able to bring the King George Sound artefacts back to country: it’s never happened in Australia before. It was our opportunity not only to bring our artefacts back but to start getting the message out there that, you know, there was a history here before you guys.