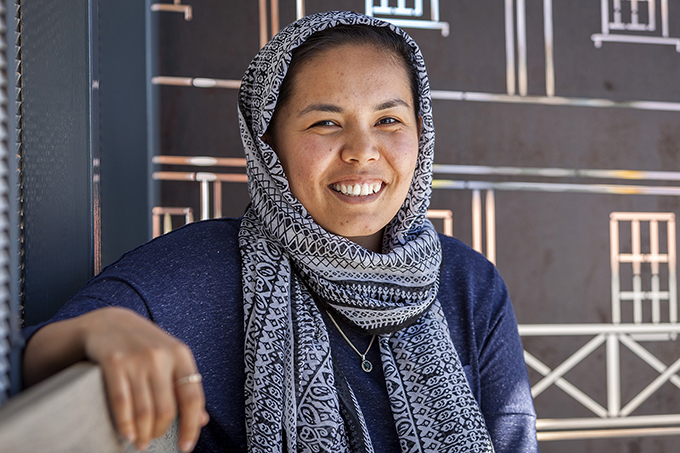 My name is Ziagul Sultani. I’m known as Zee. I live in Katanning but I am originally from Afghanistan. We came because of the war. Afghanistan is not a place for girls to grow up and be free. It gives me goosebumps to think about what life would have been like if I wasn’t here. For my father to bring us here, honestly, it’s a gift that I can’t ever pay back. Not everyone has the opportunity to do that for their children.

I remember Afghanistan well. In my head I can go from my house to the shops or where we used to get the water. And they’re all good memories because I think my Mum worked really hard to make sure that we weren’t exposed to what was actually happening in Afghanistan. For example a helicopter would fly past, she used to call it a black bird, and she’d say “oh it’s a black bird, just make sure you’re not under them.” We didn’t live in fear. She made sure we had our childhood. You know, one attack and the whole house would shake. Mum would say “oh that’s an earthquake” or something like that. She always kind of disciplined us in a way to make sure that we survived in a harsh world. At the time I didn’t understand but now I understand. It was to keep us safe.

When I was at school in Katanning I was bullied a little. Kids have no idea what they’re saying when they say: “go back to where you come from,” or at work “you have taken over our jobs.” So I had to try extra hard to make friends and go talk to them first. It was a struggle but it got better. Currently I work for the Shire of Katanning. I’m the Community/Youth Development Officer. What I went through, I didn’t want other young people to go through. I just wanted to do something for young people. Not just in Katanning, but around the world basically. Because when I came to Australia I was like “wow, this is how all children should live.” They shouldn’t be living in poverty. They shouldn’t be living without parents. And they shouldn’t be the victims of war. I never thought I would work for local government because I thought my English wasn’t good enough. But I do a lot of other advocacy work. Not in Katanning, at a State and national level. I was the Youth Ambassador for Multicultural Youth Advocacy Network Western Australia. They advocate for young people from refugee and migrant backgrounds that live in Australia and I was involved with the Youth Affairs Council of Western Australia, organising a youth summit for young people, just to lobby I guess, for regional and rural young people because sometimes we’re forgotten at a State level.

Katanning’s first Harmony Festival was held back in 2007 to 2008 at the Shire office. I actually volunteered then. I performed on stage. We danced our traditional dance and then after a few years of volunteering I was employed to run it. That’s my favourite story of the town. How I was on stage and then I volunteered and now I run it. The Harmony Festival is very close to my heart. I think it’s made an impact on the town. It’s opened new doors. It’s a festive and peaceful day when people just come together, learn about each other’s culture and food and share what they have in common. There’s actually a lot of hidden factors that not a lot of people know about Katanning. But also, I guess, the people have this sort of attitude where they’ll give you a chance. They won’t judge you straightaway. I can wear my traditional outfit and go to the supermarket and it won’t be an unusual thing. It won’t be “why is she wearing that?” I just could never think about leaving this town. It’s that feeling of being home, you feel you belong here and you have identity. People know me as my name, as Zee – not as a Muslim girl or a refugee girl – so that is always good because you feel like you’re not different. It’s very important to feel like you belong while you’re carrying your religion and tradition and culture. You need that place where you feel free to follow whatever religion you want and wear whatever you want and how you wear it. I think that’s one of the reasons why I just love this place. I always joke that if I die I want to be buried here. I really like Katanning. The first day we came to the town, I vaguely remember it but I do remember it was a long drive and when we got to Katanning it was this unusual feeling: it felt familiar. I remember a few days later my Dad would give us some change and my sister, who was older than me, got two dollars fifty from my Dad. I said “oh you got two coins! Give me one?” At the time we didn’t know the currency or anything else. We had absolutely no clue. She looked at the coins and the fifty cents looked bigger; so she kept the fifty cents and gave me the two dollars. We were so innocent and we didn’t know anything. All those memories I guess keep you grounded. That’s one of my favourite stories to tell. Now when I actually pick up a two dollar or fifty cents coin I always think of that.