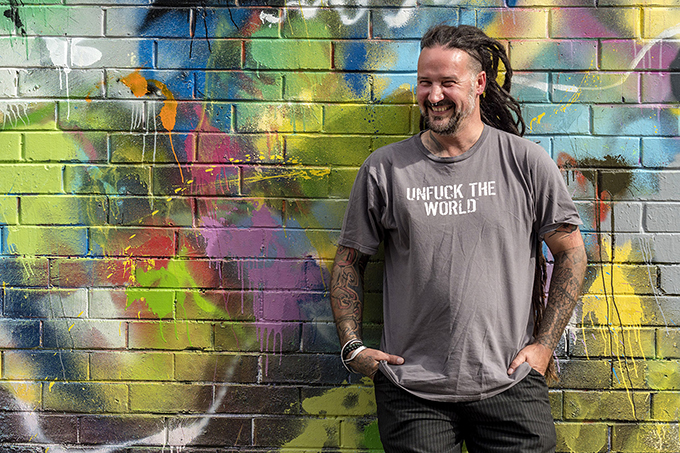 When I first moved down to Denmark, I didn’t know anyone. I was a young single Dad in my early twenties with a couple of small children, and I didn’t know what I wanted to do. I knew that the job I was doing up in the city beforehand wasn’t for me, and I was a bit of a lost soul. I thought, “I’m just going to grow a veggie garden and spend as much time as i can with my kids as they’re growing up.”

I got into youth work by accident, really. I was hanging out down at the skate park and trying to get back into my skateboarding; it’d been too many years. I think one of the other workers that was from the youth centre had heard there was some sketchy guy hanging out down the skate park, so he came down to see who I was. There was a bit of a movement to try and get a decent skate park down there, at the time. I guess because he didn’t have a background in skating, that was my avenue to sort of start speaking with  young crew and determining what their needs were and putting together a bit of a funding application. The more i got engaged with the young crew, the more I thought “wow, this is actually a pretty cool job, and this is something I could do.”

Originally I started volunteering at the local youth centre, and the workers there encouraged me to do some study. As I studied, and got more involved, other staff came and went, and, two years later, I ended up running it. I spent a lot of time really building up their programs and finding opportunities for young people. The youth centre was copping a fair bit of flack at the time for some of the young crew who were tagging in town. But interacting with the young crew, and just hearing how bored and frustrated they were at that point; we started trying to work out ways to engage some of the ones that were doing the tagging. We did a few murals and that was my introduction, really, into working with professional artists, and seeing how amazing arts engagement with young people can be. How effective that is, and also just seeing how in a town that was very white-walled, actually getting some art projects underway really benefited the young people, having their own form of meaningful engagement.

Once I started getting involved with arts and young people, it introduced me to lots of artists from all different backgrounds. It’s been quite an amazing journey, once I sort of joined those dots together. I think after doing that in Denmark for ten years, I sort of felt that I had more to share with a bigger population. When the opportunity came to move to Albany to really broaden the opportunities for young people, and also work with probably some more severely disadvantaged and at-risk young people, I realised I actually had a duty to share those skills. So I started training other people up as well. Hopefully some of the young people will start to see that if they’re not gelling with the mainstream education, and don’t know what it is they’re going to do with the rest of their lives, at least they can do art and be happy and potentially develop a career out of that as well. They come in here, and they don’t think they can draw in the classical sense, so they don’t see  themselves as artists. But soon as you start showing them all different types of art they realise there’s not just one way in, and I think it gives them an extra coping strategy. It gives them that creative outlet, and it’s actually been an amazing point of contact and social connectedness for the young people that come here.

I do feel like down south is home, even though it isn’t where I grew up. I definitely feel a really strong connection to the land down here. I think since I’ve been living down this way, I’ve learned a lot more around traditional culture down here and have realised how much I didn’t really know about where I grew up. It’s meaningful, I think, what I  do here. I don’t feel like I’m wasting my life, I feel like I’m part of the solution. This type of work is extremely rewarding. You’re at the coal face, so you actually don’t have your rose-coloured glasses; you see life at its worst, and how traumatic and how much of a negative impact that can have on a young person, but then at the same time, you can be there when they work through things, when they actually have successes. I think with myself, having children, it’s always assisted in me keeping my finger on the pulse so I actually know what world my kids are living in, and what challenges they have. I think Albany can be seen as the end of the line; I mean, WA is probably a fair bit behind the rest of Australia, so then Albany’s even further behind that, which I think can be a good thing! The town’s got some pretty interesting characters. Old buildings, abandoned spaces and just some really quirky characters, which I think make the town what it is.