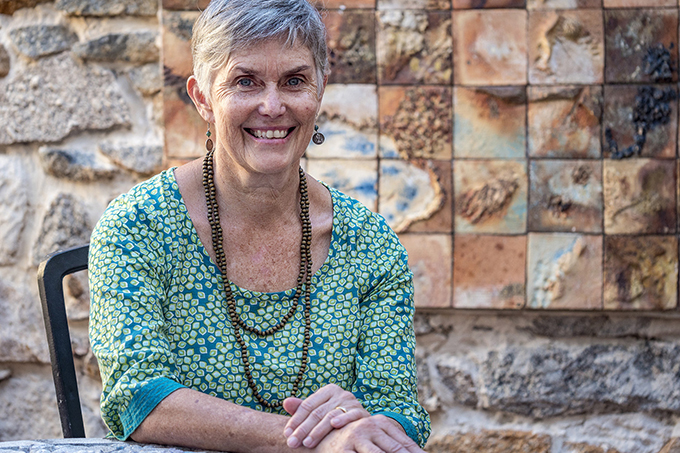 I’m a writer, I write mainly children’s books. Most of my writing work I do here in Albany, but I travel a lot for work. I speak in schools or festivals and I travel across Western Australia and Australia for that. Sometimes internationally. But most of the actual creative part happens here. I have a primary teaching background but I’ve always written, ever since I left high school.

I went backpacking in Asia as a twenty-one year old and lived in Nepal for a year, up in a really remote area near the Tibetan border. It was my first teaching job as such. I was a tutor to the children of American missionaries. I’d hike up this mountain every day to get to them, and they’d roll down and hide or jump at me from the path. The bigger children used to come on horseback into our mudbrick classroom, and we’d sing “The highwayman comes riding, riding” up and down this funny little path on the main trade route between Nepal and Tibet. My first publication was after that time in Nepal; I came back to Kathmandu, and there are amazing cafés and food there, so I wrote an article called ‘Eating Out in Kathmandu’, which was published in Let’s Travel magazine, back in the day.

I’ve been on the south coast for over twenty years. My late husband, who I’d met just really briefly before I went travelling, in the meantime had moved to WA. When I came back—via WA—it was like we’d never been apart. We moved to Denmark looking for a change, getting out of the city. Sadly my husband died soon after we got there. I was twenty eight, so quite young to be widowed. And it was just my daughter Sophie and I in Denmark for ten years. It’s a really great place for a child to grow up.

While I was teaching, I was writing as a hobby, as an interest, and as a hope to be published. I think my first book was published in 1995. So I’ve been careerbuilding for a long time. I married again six years ago. My husband’s the local Member, so he’s in Perth a lot for work. If I have work, sometimes now I’ll try and link my work into the city as well. I’d be quite happy to stay in Albany a lot more than I do, but if I want to do this job, and I want people to read my books, then I need to go out to schools and I need to travel, because they won’t find me otherwise. But I wouldn’t think of living anywhere else. I love it here. And I think walking at Middleton Beach every morning, or at Mount Clarence; that sort of nourishes my soul, and I get ideas. In Albany, pretty much everywhere you look you’re either looking at water or bush, and there’s this beautiful, wild, dramatic scenery and weather. I like that. I find it gives me ideas.

I’ve got a book launch coming up, and, at the moment, I’m doing a lot of publicity work. It just so happens I’ve got another book coming out this year, which is very unusual; both books I’ve been working on for three years at least. It is a big year: The Lighthouse Girl, a play which is based on two of my books, Lighthouse Girl and Lighthouse Boy, has just been picked up to tour WA, so that’s really exciting.

My favourite story about town has to be about Fay, the lighthouse keeper’s daughter, waving goodbye to the troops. When I first heard that story, it was just a paragraph in a double page spread in The Australian newspaper. It was about Don Watson, and his mother, Fay Catherine, daughter of the Breaksea Island lighthouse keeper, who was waving to the Anzac troops departing for Gallipoli. She would’ve been the last person those thousands and thousands of soldiers sailing away saw; and many of them didn’t come home. I just love the idea of that girl, that young woman, out on Breaksea Island, waving to the troops as they left. I guess I imagine myself in that position. That will always be a really evocative story. Every soldier who went will have a story, and everyone who saw them go will have a story. But for me, my life’s been enriched by meeting her descendants and the journey that I’ve been  on with them and with Fay, the lighthouse keeper’s daughter. I guess it then led to my book, Lighthouse Boy, and now In the Lamplight. It’s almost like she’s become an extension, a family member by extension; and I feel very close to her.