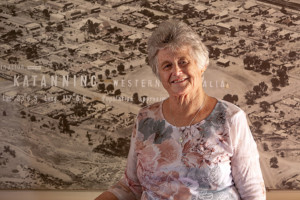 My name’s is Geraldine Watson, but I prefer Gerry. It sounds a bit friendlier. I’ve been in Katanning for the last fifty
three years. It’s my home, but I came from Perth, teaching. I was appointed Deputy Principal of the Primary School. In those days you didn’t get a choice, you went where you were sent. I was about twenty five when I came here. It was fairly daunting because it was the first time I was in position as a Deputy and the school was quite big. There were about eight hundred students at that stage. It was the only Government Primary School here. There was a young staff and we all got on very well and made good friendships that have lasted many years. My husband worked in retail menswear. I met him soon after arriving in Katanning. I’ve been officially retired since 2001 but I still do relief work and at the moment I only do that at the Catholic school. I also do some tutoring. I am the president of the Historical Society and Past President of the Garden Club. I do Meals on Wheels; I’m part of the Gallery Committee, a member of Arts and Crafts and the National Seniors. So life is busy. I became involved with the Historical Society when we were trying to save an old school building from being demolished and to have it relocated to the museum site. Working with the Education Department and local Shire we managed to do this, and I’ve continued to be part of it. It’s of the oldest affiliated societies in WA and it relies on volunteers. Being a volunteer in a country town is important, but unfortunately we see it coming to an end. For one reason or another
younger ones don’t seem interested. I’m on my own now. My husband died about twenty years ago, so I have a house and a yard and a garden to attend to. That keeps me fairly busy. I have a son in Perth and a daughter
in Melbourne and four grandchildren ranging from seven to nineteen. I’m fortunate to have a big circle of friends, so we’re always doing something. I’ve been able to do some travelling since I finished work, so that’s been great.
Katanning was a big, active country town. We had three big department stores, various sporting clubs and social functions to go to. My children were educated here. I guess I’ve just grown comfortable with it. There are a lot of heritage factors. It is an old town. There are a lot of outstanding families that have contributed to the place. We’ve had a few not so good times. When we had the trouble at Katanning hostel (referring to St Andrew’s Hostel and its former warden, serial paedophile Dennis McKenna) that cast a big shadow on the town. It did a lot of damage to the reputation of the town and it was someone who everyone trusted and no one believed was capable of doing it. It was virtually an incredible let down and betrayal. It caused, and is causing, a lot of damage. It made an incredible difference to the town and I don’t know how long you have to wait for the stigma of something like that to go away. Katanning, as you know, is a very multicultural town. That started many years ago with the early migrants who have made a big impact and continue to do so today. Distance away from families is a challenge. As I get older, the thought of not being able to drive does concern me and then decisions will have to be made. But to me Katanning is a caring town. It’s relatively safe; as safe as you can be in this day in age. I know that there are people I can call on if I need help. That’s the main thing.