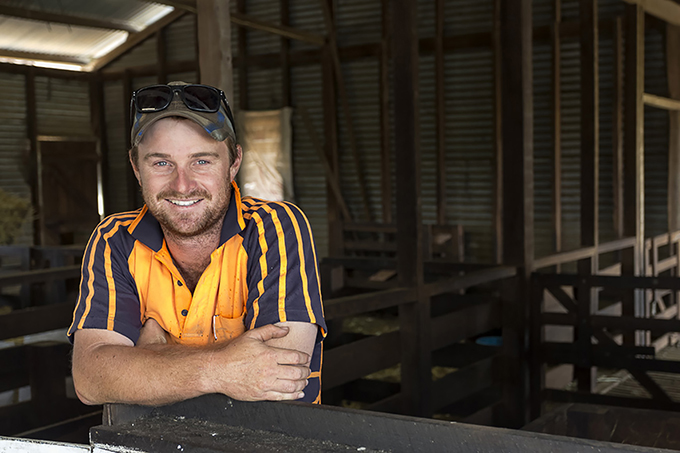 I live thirty kilometres east of Katanning, at a little siding of Badjibup, halfway between Katanning and Niabing. There’s just a church, a hall and a wheat bin. That’s all that’s here. We moved here from north of Katanning
in 2009. We had an opportunity to congregate farms out here; mostly sheep but cropping as well. We do wheat,
barley, canola, oats and lupins. The sheep are the main enterprise. I’m third generation. My Dad’s family
moved out here from Scotland in 1969 and settled north of Katanning, and then Dad took over the farm in the mid-eighties. I came home to the farm in 2007, the first year out of school. I did my junior school down here and did five years of boarding school in Perth, which was bloody good. You’re with your mates all the time. But I was keen to come home. I never really thought about it, just came home and originally just thought I’d have a gap year and then maybe go and study some agribusiness or something. But I sort of got a little bit too involved with the everyday running of the farm and found it hard to tear myself away. You pick it up as you go along. You might not get the education but you get the hands on, practical learning. I don’t think I’ve missed out too much there.

We breed seed stock rams for commercial clients throughout Australia and New Zealand. It’s not the traditional way of breeding sheep. We’ve put a more high-muscled, high-fat sort of genetics through our sheep to make them more resilient and they can withstand tougher conditions and produce more. We want to get more lambs on the ground and more dollars per hectare for our clients, so along those lines we’ve sort of developed our own brand.
I like knowing that I produce things that go and feed the world. It’s pretty rewarding. But it’s pretty tough too
because you’re working with old girl up there, Mother Nature. If she doesn’t look after you, that’s pretty tough. But
it makes you more resilient. As long as you’re talking with your mates you keep going I suppose. We’ve got two  thousand, four hundred hectares with about one thousand, eight hundred hectares arable country. We’ve got a lot of low-lying salty land, which is degraded country we can’t put sheep on. We rehabilitate it, which is an expensive and slow process. We plant trees on there, things like saltbush that will tolerate high saline and acidic soils. But  trees don’t grow overnight. They take eighteen months to three years to be able to put sheep in there and graze them. I play sport, obviously, so I go town to play tennis and footy and all those sort of things but I stopped playing footy last year so I could have more time to work, which sounds stupid but that’s how it is. You have to make time for time off I think, and I’m not very good at making time to go away. It’s not quite as flat out on the weekends though; you can have a beer at lunchtime. Coyrecup Lake is a native lake that’s just about ten kilometres away from here. We go out there and ski. Not many people go there and it feels a bit like our own private lake. We use it all the time. When it’s full we get a lot of use out of it and spend a lot of hours and beers down there. Knock off at five thirty and we can be skiing by six. I think being a bloke out here, it’s very difficult to meet a girl. I met my partner through friends of friends. I got stitched up at the start of seeding, my neighbour just up the road said “Come over for a beer.” So I said “Alright, I’ll come over for a beer.” I was covered in grease and I looked terrible probably. I don’t know, it didn’t really bother me but I went over for a beer and there was this girl there, one of his partner’s friends, and we got chatting. But that doesn’t happen very often. You’ve got the pub on Friday night. We do get new teachers come to town and they’re often girls but you have to be at the pub that first couple of weekends before they get snapped up. Without girls, communities die. So that’s a big struggle I reckon, probably the biggest one. Without any families coming along we lose sporting clubs and once you lose sporting clubs, the town dies. Niabing just up the road; their footy club folded maybe four years ago and that sucked the community dry. With the footy club and the pub, you’ve got a town and a community. You lose a footy club and you’ll lose a fair bit of the community. But if you lose the pub, you’re buggered. Everyone needs somewhere to go. People in Perth, they’ve got an opportunity to go out any night of the week to Northbridge or to a restaurant or whatever. We don’t have that. We’ve got Friday night here or we’ve got the odd function at the footy club that gives a chance for the girls to dress up. Girls need to be able to do that. But I don’t know how to fix that. I really don’t know how to fix that. How do you attract people? You’ve got more people leaving town than coming to it. People feel remote, isolated, cut off. Phone reception is a big thing. We’ve only just recently had a tower put up out here. We used to get nothing which I used to think was great, because no one would bother me, but then when I’d go to town my phone would sing all the way to town with messages and missed calls. So that’s another big off-putting thing. If you say to a girl you meet in Perth, “come down to my place” and there’s no reception, there is fat chance she is going to stay. There are definitely things we need to fix.

Harvest is flat out, long hours, you’re sort of getting up at five and not getting home until ten, eleven, twelve at night. I drive the truck, so cart the grain from the paddock to the receival site at CBH; just back and forth. It’s the most tired I’ve ever been I reckon, driving the truck, because you’ve just got to concentrate so hard. I’m getting more used to it now but when I first started I was a wreck. Because you’re driving a vehicle that weighs fifty tonnes so you can’t just stop like you’re driving a car. But harvest can be stressful or it can be very cruisy; weather picks how it goes. If you get rain events it sort of drags on a bit and no one likes harvesting in January because everyone wants a break. We all want to be down the coast in January. Everything in farming is trial and error and Mother Nature determines how successful you are. Rain at any time of the year, even though it might disrupt harvest, is a good thing. I reckon it is anyway.