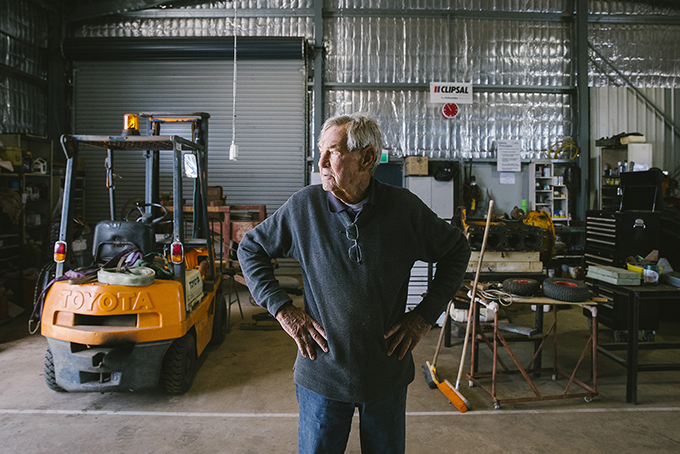 My Dad drove over here from the eastern states in 1927 in an old utility with his cousin, looking for a farm to buy. He found one twenty kilometres south of Merredin which had water piped in from the Goldfields. Back then, seventy years ago, wheat used to go to Perth in open wooden wagons on a steam engine. There’d be huge stacks of wheat in bags lining the back of the wharf in Fremantle. Freight to all the outlying towns came through Merredin and the railways worked twenty four hours a day. They’d go clangbang- bang-bang-bang fly shunting at all hours of the night and wake everybody within one hundred yards or more. Today, Merredin’s CBH facility stores seven hundred and fifty thousand tonnes of wheat; there are sixty four wagons on a grain train carting four thousand-odd tonnes to Perth. It’s a different operation altogether.

When I was a kid here, there used to be two dances in town a week, at the Railway Institute and the Town Hall. Every girl went down and sat around the wall and the fellas stood around the door. Five nights a week there were pictures on at Cummins Theatre, which was actually transported here from Coolgardie, and on a Saturday night the theatre would be almost full. When I was twelve I went to boarding school in Perth and it was my first time
in a school classroom. I’d never seen a blackboard in my life because we did correspondence. They used to send our lessons out every fortnight and we’d do them with my mother’s supervision. After school I came back to the bush again and started working as a farmer. I’ve done most things as part of that, from being a mechanic to fixing things to shearing sheep. My father was a self taught veterinarian. He would assist at things like difficult births.

met my wife Bev at a twenty first birthday party in Merredin while she was teaching out at Wyalkatchem. We spent that night dancing and after a little while knowing her I said, “Do you think you’d better get a transfer to Merredin?” So she did. We were married in Perth and we formed a pretty good team. We had two children. When my brother and I took over running Dad’s farm we expanded the enterprise by double and then increased it. I used to get involved a bit with the grain industry, and my brother generally organised the sheep. We farmed until six or seven years ago. My son didn’t want to continue farming and I didn’t want to be farming when I was eighty so I said ‘well, best we sell the farm and go and do something different’. So we got everyone a house and moved into town. I still think it was one of the best decisions we’ve made was to stay in Merredin. When we moved into town my mates said to me “What are you going to do when you sell your farm and move into town?” and I said, “I’m going to start a Men’s Shed for Merredin.”

I knew about Men’s Sheds and their influence on men’s health and I thought ‘Well, you’ve got to do something!’ So I built a shed up the other end of town where I’ve got a workshop and then we set about setting up the Men’s  Shed. I suppose hat was a pretty big challenge when we started. We had a meeting and we got thirty or so old guys along and we decided to go ahead with it. It took us about three years. It’s a bit of a success story I suppose. We’ve got quite a lot of members by general Men’s Shed standards, because a lot of the Men’s Sheds are only as big as a garage and they’ve got three, five, eight members maybe. We have about fifty members, on our regular Thursday meeting day we get twenty to twenty five members and on any other day of the week you will find blokes
working on either their own project or an ongoing Shed project. Some of them work in the workshops and some of them come down every day and do projects or make and fix things. It’s a real social outlet. We don’t have alcohol or anything like that at the Men’s Shed and never have done. By and large, members of Sheds are not interested in the politics of Sheds. They just want to enjoy the company of others, have a chat or a laugh, tell stories and jokes and be happy. They want to work on projects, either their own or the sheds’. They usually like to work in pairs or groups.

Lots of good things happened in Merredin. I was only telling someone this morning about the circus elephant that died in Merredin. True story: what do you do with a dead elephant in the park? The circus came through here, and one of the elephants died while it was in town. One of the local farmers, Ray Evans, a real character around the town said “I’ll take it”. He loaded it on his truck and took it out to his farm at Fagan’s Folly and he left it in the pig yard. I don’t know whether you know much about animals dying in hot conditions but generally their hide stays upright, because that’s the thickest part. So this elephant’s hide was as solid as a little house. Anyway, out to the pig yard a few days later we realised we couldn’t find any pigs. Ray thought they must have got out. But when he picked up a big stick and walloped the hide, all these little pigs come tearing out of the elephant hide into the yard. They’d cleaned out the interior fairly well and found a great place to live inside.