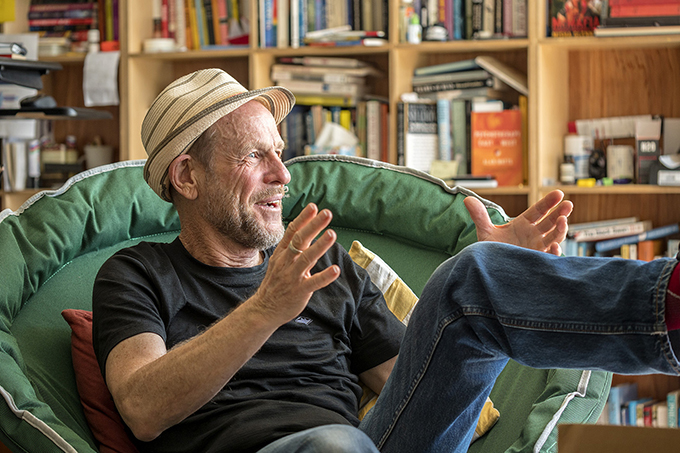 I never wanted to live anywhere else but Albany. Just here. This place has always been with me. My mother’s people started here so I’ve been coming here all my life. When I was an excitable young boy, I was brought here. When I was a drunken young idiot, I came here. As an adult, at university, I came here on my holidays. I brought all my wives here, all two of them.

I don’t know of another large place – not in the West, anyway – that has what Albany has. It has a cultural core, many cultural cores. It has landscape, it has spectacular coastline, it has constantly changing weather and every day is different.

I was born in Bridgetown. My people were orchardists they had a shop. We had thirty acres of apples, and then other things: peaches, plums, and pears. As kids, we worked pretty much the whole time; if we weren’t working in the orchard, we were working in the shop, or playing games, or reading books. We had a lot of books; my father was a big reader. Because our parents had money, we were all sent off to a very expensive private school, and it was there that I learnt that I loved to write. Because I wrote letters home. My mother saved my letters, because they were full of little stories. When you read them you can feel the  flow of somebody who is enjoying himself. Whereas my brothers’ letters would read: “Dear Mum and Dad, the sun shone today. We had eggs for breakfast. Thank you for the apples.” In school, I was only good at two subjects, History and English, because they were about writing, and they interested me.

I left school drunk, stayed drunk, joined the bank at my father’s insistence, and worked in the bank until I was sacked in Papua New Guinea. After that I came home, worked in the family business and ran the farm. I realised that that wasn’t for me either. But I ran it until my brother came home, and took the business by the scruff of the neck and made an empire. I left, grew my hair and a beard. During those four years in Manjimup I’d suffered an internal growth spurt: I’d begun writing. I think you’ve got to be who you are, and if you aren’t who you aren’t, you aren’t going to be who you are. As said Joseph Campbell, good mate of Carl Jung. So realising what I wasn’t – a farmer or a retailer – helped me work out what I was – a writer and speaker.

For about the next fifteen years I worked as a professional speaker at conferences, public events. I started a stand-up comedy club in Perth called Laugh Resort that, in fact, ran for twenty-five years. I did this thing at Curtin University Business School’s Centre for Entrepreneurship. It was using the Jungian psychological models to help people get a better  handle on themselves and the people around them, and how best to take advantage of their strengths and how best to deal with their weaknesses. I published a couple of books myself, but then, as luck would have it, some  other people have published some too. Boy on a Wire published by Fremantle Press was long-listed for the 2010 Miles Franklin. I stood for election, and I wrote a book called How to Lose an Election, The motivation for that, for running politically was purely for comic material. I stood for the seat of Curtin, which was Julie Bishop’s seat. My card read “Vote Doust Six.” Because I knew I was going to be last. I said “It’s realistic. I’m going to come  in last; I’m honest, I’m real. Don’t vote for me! Put me six! Make me honest! Make me clairvoyant – I predict six!” So I  finished up sixth, of course and I got a lot of work as a clairvoyant henceforth.

Because of this deep love I had for  Manjimup, the place and the people who had helped me evolve, change, develop, grow, there was a part of me always  wanted to do something for the town. That – combined with a love for that farming, country thing of giving things to people that you grew yourself – is how I ended up sinstigating the Manjimup Cherry Harmony Festival, along with a core group of wonderful women. It’s been great for the town. It’s helped change the mood of the place. Here in Albany, I write. I’ve been here eleven years, writing and working as a tour guide when the cruise ships come in. I love delivering historical content with a sense of humour, with a weak, with a quirk. And I’m on the board of the Men’s Resource Centre, and Creative Albany. I just love this place. There’s a strong group of writers here, a writer’s room has just been started up at the Vancouver Arts Centre, and you’re getting fabulous young people turning up for no apparent reason. What’s changed of course is that all these new people have moved in, all these people who’ve moved back, they’ve added richly to the culture of this place.

The cultural core of this town is its best kept secret. What town of this comparable size could lay claim to six Miles Franklin Awards? I don’t know how many people know that The Waifs are essentially an Albany band. I don’t know how many people know that essentially Kim Scott is an Albany writer, that essentially Tim Winton is an Albany writer, and, of course, Sarah Drummond, and Graham Kershaw. It’s like the ability of this sad-looking soil to grow beautiful things if you treat it right and grow it right, there are many cultural cores to this place, many  kinds of things that flourish. Then there is the rich history of the Nyoongar Minang, the first people of this place, many of whom I consider spiritual brothers and sisters.