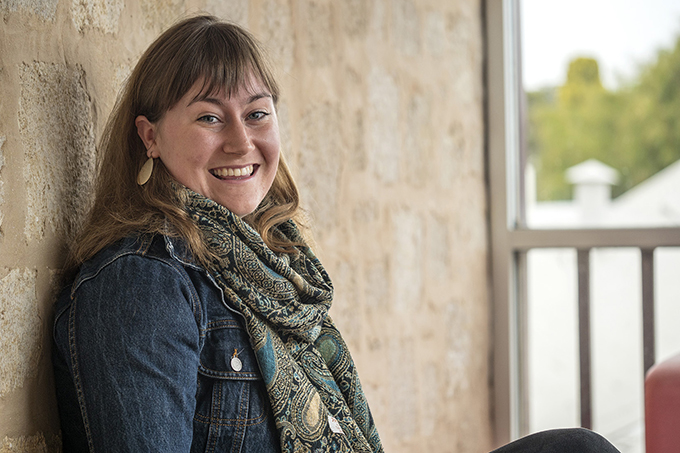 I live in Albany, on the traditional lands of the Minang people of the Nyoongar nation. We’re about twenty minutes out of town, on the Lower King River, with a backyard full of paperbark trees and samphire. It’s a really a beautiful part of the world.

My parents travelled round Australia before having kids to find their perfect country destination, and the South Coast was that place. They really liked the idea of free-range kids; my sister and I growing up with animals and open space. So we moved from Perth and they bought an asparagus farm. My parents are not asparagus farmers, so that lasted for a year. Then while my sister, Erin, and I were at Denmark Primary School, they bought a bakery. That meant the best ever birthday cakes for Erin to take to class. Eventually, I went to high school in Albany, Mum and Dad sold the bakery and moved across the bridge. They’ve made Albany home while Erin finished high school and I was at university in Perth. At the end of last year, I moved back down to Albany. So this is home.

I present the mornings show on ABC Great Southern, which is interesting, because you go to work, and you do a radio show about the place that you grew up and now live in. But what that means, to do it well, and what I’m still figuring out how to do properly, is trying to kind of understand this community well enough to broadcast to it. It’s something that’s really hard, and I think something I’ll never entirely figure out, but something I’ll continuously try to do.

Being at university and being away from the place has really made me love it a lot more, and be aggressively proud to come from regional Australia. I think people often see living in regional Australia as something you need to do to further your career, like, if you’re a doctor, or even if you worked at the ABC; you do your time regionally and then you leave. And that makes no sense to me. The opportunities here are phenomenal. I was doing an internship with the ABC, and two weeks of that was down in Albany over the Christmas period. I had this sense coming down that I just didn’t want to go back. I was doing emergency broadcasting, and just really staying involved with the ABC, and then the Saturday Brekky job came up. So it’s all just kind of fallen into place, which is amazing, and I’m still pinching myself that it’s happening.

I think what’s tricky when you move from the country, or when you are trying to start just about anything, I guess, is not having that tribe. That group of people that are similar to you, and are kind of going to be your cheerleaders and support one another in what you’re doing. In 2014, in Perth, I applied to be a Young Creative with Perth International Arts Festival, which is a really great program that basically gives young people who were doing anything in the creative arts an opportunity to be part of the festival, and see shows, be part of workshops, review things and just kind of see how the industry worked from the inside. The young creative program really gave me a whole new world filled with people who are just as passionate as I am about writing; about creative things. It was an incredible, incredible opportunity, and it really changed the way I looked at the arts. It made me realise that you could do this as a career. The arts are not something to just do with your mates on the side, you can really make a go of it. I feel like there’s a bit of a turning point, a watershed moment, for Albany right now, in terms of arts. I don’t know what or where this has come from, but it feels like there’s a real change in how seriously this town is taking arts. It’s cool to be able to be in a creative space in a time when it’s really ramping up. Even just having a room now at Vancouver Arts Centre that supports writers is huge. We have access to this space to write and The Writer’s Room puts on small events over the year that gives writers the opportunity to come together and connect. Because writing’s obviously a very solitary activity, and it’s hard to find that community, to find that tribe. The goal of The Writer’s Room is to try and bring that community together and celebrate what they do.

Coming back here, and doing the work I am doing, gives me an opportunity to unpack the place that I grew up in, in a way that I don’t think I would have the opportunity to do anywhere else. It’s not an opportunity you get often, to come back to the place that you grew up in and to see it in different ways. There are so many interesting issues, I think, that have been normal growing up, and coming back and seeing them in a different way is really, really endlessly fascinating. What keeps me here is realising that Albany’s a beautiful way into the world, and a special place to understand some of the challenges that come with living in the twenty-first century as a young person. One thing I’m kind of realising now, is just how powerful regional Australia is and how powerful community can be. A couple of years ago, one of my best friends passed away from congenital heart disease. Logan Adams. No – one really saw it coming. What happened as a result of that was that his friends arranged a charity bike ride from Perth, riding through Kukerin, where Logan grew up, back to Albany, to raise money for Heartkids, the foundation that had supported Logan through his illness. I’m not  much of a cyclist, but I got on board to help my friend Daniel Leary and Maureen Adams (Logan’s Mum) out. We had about twenty riders, people that grew up with Logan, that knew the family… and we did this ride, from Perth to Albany over a week. Our goal was to raise fifty thousand dollars for Heartkids, and we raised more than a hundred thousand. That ride was successful because people knew people in the different communities. We stopped along the way out and people would be putting on morning tea for the riders, they’d be cooking them dinner, they’d be sharing stories about Logan and about the family and just really supporting and getting behind this cause. The ride was massive, and it was a testament to what can happen when small communities come together. I think that’s the story of Albany, is just friends – the friends that you make here – that just doesn’t change. The place informs those friendships in a way I’m still trying to figure out.