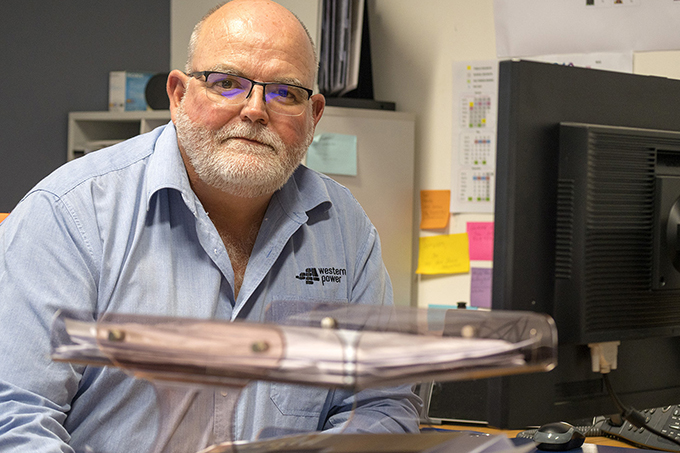 I live in Albany, been here nearly twenty years this time around. I grew up here, went to school here, and eventually moved away just for a while. My grandfather, when he first came to Albany, got a job working at the power station in the middle of York Street. He worked as an engineer, keeping the engines running for the power station.

My father and his brother both ended up being electricians as well. They went out and started up their own business, and were going around wiring up houses in the early 1970s My grandad, my father and my brother all ended up working at Western Power. I ended up working here too. It was, I guess, a bit like a family affair. My brother still works for Horizon Power, over in Esperance. But my original role was working in a bank. After school I did about two years in the bank, and was transferred up to Karratha. In the end it wasn’t for me, being in Karratha; it wasn’t my scene.

I do a job now called a Field Supervisor, it’s one of the new roles which was created probably eighteen months ago. It’s more a bit like an old-style foreman, in one way: an overseer for the crews. I look after two glove and barrier crews here at the moment and I look after Jerramungup Depot as well. The idea is to get out and see the guys out in the field and see how they’re going, so there’s a fair bit of travel.

When I can, I like to go fishing. I’m a keen fisherman, got my own boat, and when the weather allows me to get out on the water, that’s sort of my passion. You can go out deep, if the weather allows, and catch some quality fish. Or come in close and catch King George Whiting, you can get a good feed of those, and squid. I’ve got a four-wheel drive as well, so you can go off to the beaten track, get out along the coast and spend the weekend away if you need to. There are out – of – the – way places that you can go to. The Stirlings, the Porongurups, or cross over to Denmark way and Torbay, Muttonbird Island. The wildflowers come out in August and September. Rugged coastline, with all its granite. And you can actually get up on a couple of the mountains and get a bit of a view.

To me, it’s the scenic beauty of the town, the access to the water. You can do watersports and fishing. You can travel out a little bit and still find beaches where you could be the only one on the whole beach. I suppose I don’t really change too much, if you know what I mean. I’m not one of those. I’ve still got a twenty-year old car, a twenty-year old camper trailer, I’ve been in the same house for twenty years, and I’ve had the same wife for thirty-two years. Cheryl grew up in Pingrup. I met her when she came down to do enrolled nursing training in Albany. At the moment both our girls are pregnant. So I’ll be grandad. That’ll be the next stage, I suppose, looking after  grandkids. Even though they’ll be in Perth, I imagine that they’ll be coming down a bit more and saying “here ya are!