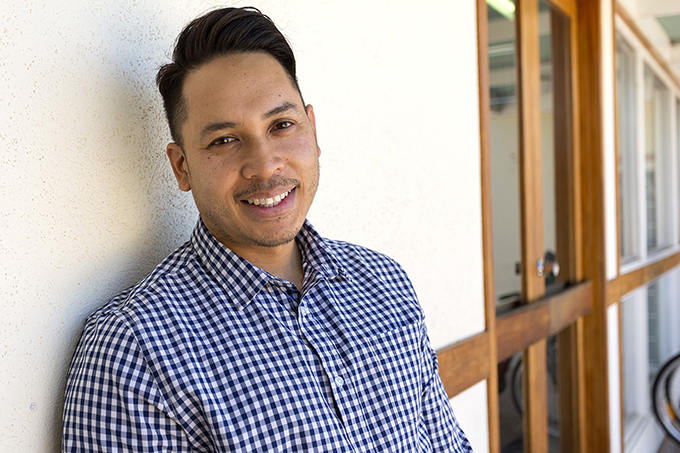 I’m Katanning-born and raised. My parents were originally from the Cocos Islands. Dad got a job at the local  abattoir as a halal slaughterman, so they moved here in 1976 with my grandparents and great grandparents. Three generations all moved here together. When you grow up in Katanning all you feel like is “I need to get out of this town.” After high school I had an opportunity to study overseas. Islamic law is big part of our heritage and religion, and my father and the Cocos community had identified a gap: the older generation were getting older and they didn’t have a younger generation to step up and help out, so they sent me overseas to learn. I spent two years learning Arabic and then four studying Islamic law in Jordan. I really enjoyed it. Studying in another language is hard. I learned Indonesian and Arabic and spent a lot of time with Malay students who shared my heritage. I came back with all these languages, so I do a lot of interpreting here at the Shire now, when the older generations come in and want to pay their rates or fill out forms. But after Jordan, I just wanted to travel. I went to Paris, travelled Europe and ended up in London. It was when I was in London, running out of money, that I made a really good friend at the local mosque. I told him I was looking for work, and he said his father-in- law had a Muslim record label, and had signed up all these singers from all over the world. They were from places like Malaysia, Indonesia, South Africa and France.

The friend turned out to be Cat Stevens (Yusuf Islam’s) PA. And I ended up becoming his PA. I was the PA to Cat Stevens’ PA. He was so busy that his PA needed a PA. I didn’t know who Cat Stevens was, because he wasn’t from my era. So when my friend said: “My father-in- law is Cat Stevens, aka Yusef Isla.” The first thing I did was go home and Google him, and that’s when I realised what a huge name he was. When I listened to his songs I picked out one that we had played at our high school assembly. Mr Pritchard, my old high school teacher, he’s still here. I got in touch with him at the time and I said “sir, guess who I’m working for?” He thought I was lying. He was Cat
Stevens’ biggest fan. Growing up, I was into music. Around the time of nine-eleven a couple of us local Muslim boys in Katanning had wanted to spread a message of peace. So we’d made a little CD with our songs on it. They played keyboard and drums, and I did backup vocals, and I had that CD with me. I said: “look,I’ve got this CD. I was wondering if you could have a listen to it?” and Cat Stevens signed us up! We were artists and crew, and I looked after the musicians on tour around the UK. One of the biggest concerts we had was at the Royal Albert Hall and I invited my cousins over from Katanning. We were his backup singers. We sang Peace Train. It was awesome. I think it was the highlight of all our lives, being backup singers for Cat Stevens at the Royal Albert Hall. We released an album under his label. Our group was Kotrenada. It’s an Arabic name and means mist, peace
or harmony. After a while I started to get homesick. When I came home, two years after that, I appreciated Katanning in a different way, and wanted to give back to the town and the community. I think I realised by then that you make it what it is. I’ve worked for the Shire for nine years and I am still here. I work in Human Resources. In my spare time, my wife and I have a catering business. It started as a way to share our culture with the community
and we cater a lot of community events. We use family recipes and try to renew them. Our ancestors were from  Indonesia and Malaysia and as they moved to the Cocos Islands, their cooking evolved. Cocos cooking is different to Malaysian and Indonesian cooking so what we do is fusion-Cocos cooking. We mix it up and give it a unique Katanning flavour. And on the weekends I teach at the local mosque as well. We have Sunday school for the kids.

As a young Muslim or Malay boy growing up in Katanning all I wanted to do was fit in. I’d be really ashamed when we had to wear our traditional clothes. When we had special occasions like Eid festival or praying at the mosque and then we had to go to the shops afterward I would make sure I wore my pants and a normal shirt underneath and I’d take off my traditional clothes because all I wanted to do was fit in. And now I find the younger generations, they’re not worried about that because it’s accepted, it’s ok to be different. The younger generations will wear their sarongs or their Malay outfits or Koren outfits out because they won’t get any funny looks. Everyone just thinks it’s normal. That’s what I find interesting about Katanning as well. I see the changes that have happened. I know that all my friends and I weren’t like that. I think the Cocos Islanders that came first in 1976, they kind of did the hard yards for us. They introduced our culture and our religion to Katanning. By the time I was growing up here, everybody was mostly used to us. We didn’t have to explain ourselves, or why we dressed differently. The town was generally really accepting, but you always have people that don’t understand. We do face ignorance and racism, but we try our hardest to teach people. At the mosque we hold an annual open day so people come and hopefully realise the mosque is open to everyone. I think food brings people together so that’s one of the main reasons I got into the food industry. My wife and I have three kids. My firstborn is Laith, second is Shadia and the
third one is Luai. They’re all Arabic names. But they’re easy for everyone to say, so we thought about that too. My wife is like me, her Dad was from Cocos Island and her Mum’s from Christmas Island but she’s always been a Katanning girl. Her brother was one of the vocalists in the band. There are four of us in the band. We don’t do as  much with music anymore because we’re all busy with our own families but we get together once in a while and perform in Katanning. Have a little jam when we have our Eid festivals and make a little comeback. That time in Europe was the highlight of my life. It was so fun! But I had a coming-of-age time where I just thought, I want my  family, and I want tobe home. I hadn’t seen them in seven years. And I was close to my family because that’s all we have here. Because I was Westernised from growing up in Katanning, the Middle East was a culture shock for me. The funny thing was, over there, they all celebrate Christmas because they have a big Christian community as well. It’s awesome when you get both worlds. That’s what happens in Katanning too. They celebrate our Eid, and we celebrate Christmas and again we all celebrate through food. We celebrate everything.