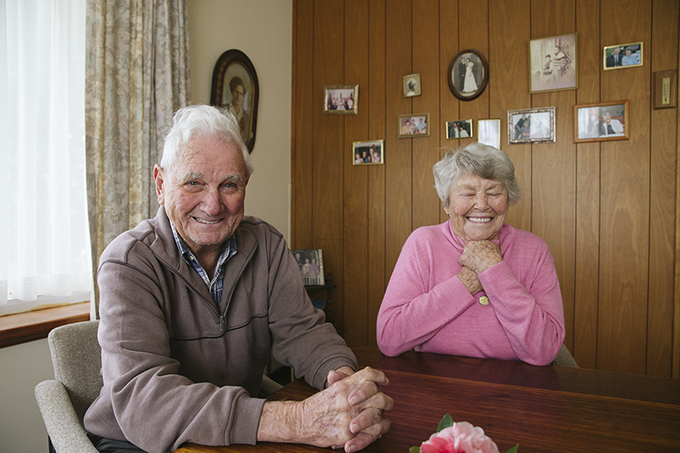 There were thirteen Crooks on the original farm; and poverty. In 1910 when land at Nukarni, twelve miles north of here was allocated by the government, they were issued with five hundred acres, a tent and two boxes of axes. So they moved camp from Victoria. They weren’t farmers. Mainly they lived on what they could filch around the countryside. I remember pidgie-wigie pie, kangaroo soup; and we kept dogs to catch rabbits. We had our own stock and grew our own veggies.

Every Christmas we were sent up a pudding, and Christmas puddings in those days had thruppenny bits baked into them. Silverware. So the more you ate, the more money you got. One particular year we hung it up on the chair away from the dogs, or so we thought, and they come back one evening to find the pudding was gone. Thruppence was thruppence in those days so we tied the dog up for three days and got the money back.

We were all well fed during the war though, because a couple of miles down the road in amongst the salmon gums they set up an army distribution point. We had a contract with the army there. Dad would supply them with milk. We’d give them a horse and cart and they used to come down every morning and collect their milk. In the meantime  hey’d fetch back dented tins of apricot, sacks of rice and so forth. We never lived so well in all our bloomin’ lives. Bags and bags of sugar, which was rationed. The whole country ran on little ration tickets at the time; sugar and tea and butter were all rationed.

We grew up in Nukarni and did a few things after: I was in the Air Force and then the bank, but we all finished up farming; myself and four brothers. We were on the farm for the most part of our lives, all of us. As far as that partnership was concerned between the brothers, we’ve never ever signed a form confirming the partnership or dissolving it. Not one signed bit of paper. We just sat on the bull bars of our utilities and said ‘well this is what we’re going to do,’ and we went out and did it. Not one bloody signature of any sort. This is five brothers getting along together. I still marvel at it. We never had a dispute of any major consequence. We might have called each other a silly bugger at times but that was par for the course. In those early farming days you were virtually financially short all the time. Forever. But it didn’t worry us. We were going to Saturday night dances and meeting our wives, playing football or cricket on Sundays. You didn’t give a hoot about anything. It was a wonderful life.

One of the reasons we all got through reasonably all those ups and downs on the farm—and by Christ there were some downs—was because of the women we’d married. And they all got on well together too, which was even more remarkable. We finished up with five sons and I think they’ve taken the example of their father and uncles, getting on well together.

Our parents made sure that we were fairly well educated and to educate five of us, that cost a lot of money in those times. I look back and wonder how any of the parents managed to get their children educated. Pigs kept everybody alive during the sixties, seventies and eighties. Merredin had the biggest pig sale in the southern  hemisphere, about three thousand, three hundred a fortnight. John, our brother who has died now, he holds the record for the number of pigs sold in one day. He had three hundred and five, and six or seven blokes helping
him drive the pigs down the road. If it wasn’t for pigs this wouldn’t have been a town in Western Australia. Pigs at that time were sold in fictitious names; a lot of them went out in cash, and the taxation department in my view took a pretty lenient view, because they knew bloody well that the farmers would be shot without being able to sell their pigs. Everybody was putting their pigs in the name of Jones. This Jones, they found out he was the biggest drover in Western Australia. It was bloody priceless.