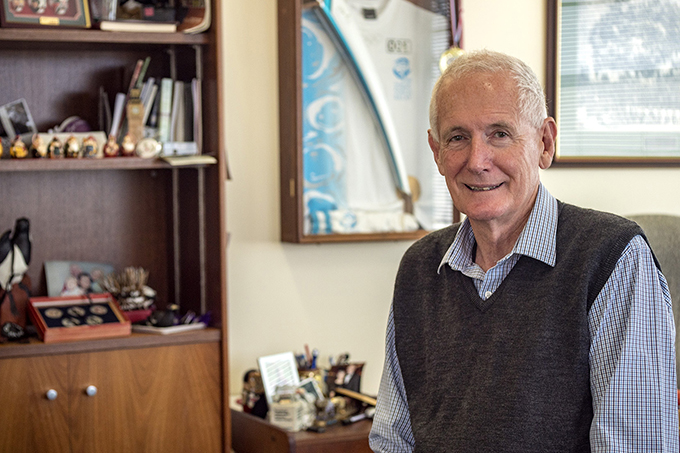 I’m the local member for Albany. My job is to look after the interests of more than twenty three thousand constituents. My electorate extends as far as Jerramungup, which is more than two hours away, and all of the City of Albany. I feel very privileged to have been the local member for seventeen years. It’s not a Labor Party seat, it’s a Conservative seat, so when I got in I was the underdog, and I have been ever since. I’ve won five times now. Each election I’m the underdog, but I love a challenge. I’m also the Speaker of the Parliament. I always say, there are fifty nine adults with an ego, and I’m one of them, so I’ve got to control them.

I was born in Melbourne. I was an Air Force brat and lived all over Australia on Air Force bases until my Dad retired in 1961, and we came back to Perth. I was a runner, fifteen hundred metres. I went to the Olympics and Commonwealth Games, fifty years ago now. It was in Mexico in 1968 and I carried the Olympic Torch when it came through here in 2000.

I’ve lived in Albany for more than thirty years. I worked for Australia Post for fifteen but I love helping people, and I wanted to get things done in Albany. I thought if I’m going to live here for the rest of my life, I want to do something for the town. I want to help people, and the main thing in this job is listening to people. People want to have a voice, or someone to listen to them. And you can cut a lot of corners as the local member, especially when you’re in Government. You can get access to the Ministers and you have direct contacts with all the major Ministers, Centrelink, Department of Housing, so you can help a lot of people. It’s a seventy, eighty-hour week and there’s a lot of travel, so you have to be in it because you love it but I just love my job. I love meeting people, I love helping people.

I get up every morning and take Harry, my dog, for a walk along the foreshore, I get a coffee and he gets a biscuit, at the coffee shop down there. Then I come into my office, when I’m in Albany, and I would probably see six or seven people a day and then there are functions at night. Mondays it’s back into it again. Parliament is on Tuesday, Wednesday and Thursday; and I generally come home on a Friday morning so I can see my  constituents.

You’d be surprised, you know, the things you deal with as local member. The first day I started, I had two people come to see me: one was a Scotsman named Watson, he paid twenty-six cents more on his Western Power bill than he did the month before, and he wanted to know why. And the next person wanted five hundred thousand dollars to do a rail service from Albany to Perth. So that’s the sort of the range you go from. People come in here with real personal issues too, and just want you to listen. But there’s some horrible stories you get which you can’t tell anyone. I had three guys come a few years ago now, and they’d been sexually abused at a college in Katanning. They’d been to everyone else, and no one listened to them. I managed to get an inquiry into it and ultimately to get them compensation. But, with the Katanning one, I went home and my wife kept saying: “what’s wrong?” I said: “I can’t tell you.” I couldn’t sleep for a week. So it’s all the things, especially for a country member. City members probably wouldn’t notice as much, because they don’t know everyone, but I walk down the street and people stop me with an issue. You’re continually in the public eye.

The things people worry about? Probably housing, especially in the low eco areas. That’s an issue at the moment. We have people sleeping in cars, people sleeping at the forts at night, meth’s a huge issue. And probably mental health, mental health’s the elephant in the room. But I think in Albany, it’s a very lucky place for people. People don’t maybe appreciate how lucky they’ve got it here. There are good people here. I love the fact that we’ve got the ocean, we’ve got the bush and what a history. I think development is happening in Albany, too. We went through a phase where the whaling station was closed, the spinning mills were closed and we seemed to be just plodding along, relying very much on the hinterland farmers. But now we’ve got the Entertainment Centre, we’re building a hotel next to it; those sort of things wouldn’t have been thought about ten years ago. There’s a confidence I think in the town that’s growing. We had the hundredth anniversary of the Anzac departure recently, and we had the Prime Minister, and the Prime Minister of New Zealand there, and the town absolutely smoked it. And everyone’s thought “gee, we can do that! We can do things!”