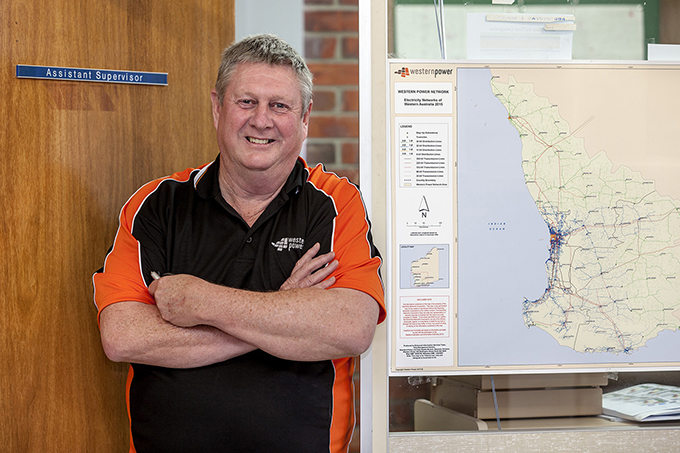 I’ve spent most of my life in Katanning. My family moved to Western Australia when I was in nappies, and to Katanningn when I was two. Dad was a cobbler, he ran a boot repair shop and drove the local taxi, and my Mum ran the King George Hostel. Straight out of school I got a job as an apprentice mechanic. I did my time split
between work on Chamberlain and John Deere tractors and Toyota cars. Once I finished, my wife Lee-Ann and I spent a few years in Port Hedland. When we came back home to Katanning, I decided I didn’t want to go back into mechanics. I heard the State Electrical Commission, now Western Power, were looking for some young blokes to put on; so I went down and applied, and 34 years later I’m still here.

I’m now the Field Supervisor for the Upper Great Southern area. I look after Katanning and Narrogin depots. Accountability for all the work scheduling comes across my desk. I’m basically responsible for looking after everything that happens in the depots. I have a strong sense of civic pride and commitment to my community. I was a Shire Councillor for twenty years, serving two as Deputy Shire President, and I’ve been involved in community groups like the local Landcare group, the Historical Society and the RSL. I was actually talked into first running for Council by my boss. He thought that it would be good for me and that I would be able to make a good contribution. I had no knowledge of Council or what it did, but he just kept on and on about it. Eventually I thought I’d outsmart him; I said “alright, you pay my nomination fee and I’ll run.” I thought, “well that’s it, he’ll never raise that again”.

But he walked into his office, came out, and chucked forty dollars on my desk. I don’t know what his motivation was but I kept my word and twenty years later I was still on Council. I was the youngest by a long shot in those days and once I got elected and I understood what it entailed, I realised I could either sink or swim. It was a big learning curve but I decided to swim. I learned everything I possibly could and I got involved in everything that I possibly could. It just opened my eyes up. Before Council I was just a person who lived in the town. When I went to my first Council meeting I only knew two people at the table. That’s how green I was. These days I do a lot of litter drives around town, and I’ve also been the driving force behind a local graffiti removal program. Katanning is  basically free of graffiti now, but you don’t do that all by yourself, others have assisted from time to time. One initiative I’m really proud of is the restoration of an old truck that used to be the centrepiece of Katanning’s entrance statement. A 1946 Chev donated by a local farmer. It had been part of the landscape since the nineties, but time had taken its toll and it had slowly rusted away. When the new roundabout was built she looked destined for the tip, so I put a proposal in to the Shire to restore her back to display condition. I just couldn’t see her lost to the community. It meant that whatever work was needed, I had to be willing to do. It took a lot of hard work but  about five hundred hours later, with a lot of support from people around the town, especially my son-in-law who is  bit of a panel beater, we’ve got her back to display condition.

I like the quiet life. I don’t like the hustle and bustle of the city. It takes me about four minutes to get to work in the
morning; there’ll be a song playing on the radio when I leave home and it’s still playing on the radio when I get to work. I have five grandchildren and I get to spend a lot of quality time with them. I take the elder ones to Taekwondo every week. They aren’t big enough yet to work me over yet, but it won’t take long. I’m just a country boy at heart. There’s not much to me. I do what I do because I enjoy doing it. Whether it was being on the Council, doing rubbish pick-ups, removing graffiti, helping community groups or doing up the old truck. If I can get behind in a project and it’s good for the community then I don’t mind getting involved.