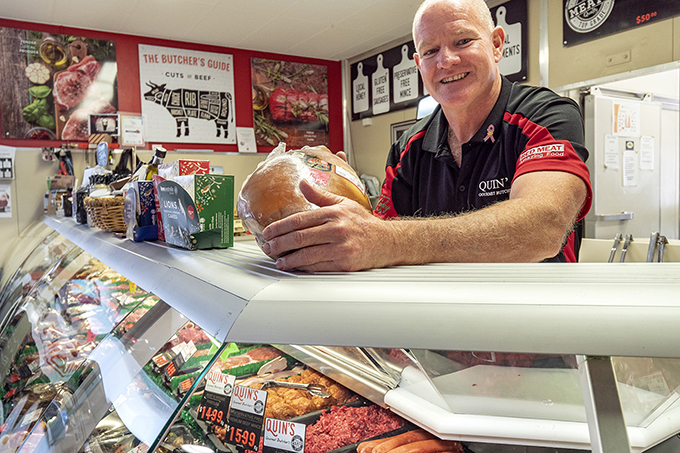 I’ve left and returned to Northam four times in my life. We first shifted here when I was fifteen and my Dad ran the old swimming pool. I grew up, married a born and bred Northam girl – I met her at a Bachelor and Spinsters Ball in Muresk and we’re twenty five years married this year – and even though we’ve been around Australia, we just sort of always came back here.

We’ve lived in Broome, Kalgoorlie and Karratha. I’m a butcher by trade and I wanted to go strike out on my own, so I bought a butcher shop in Jurien Bay. We were there for five years, but when we had young kids we came home to Northam. I actually bought the business that I first did my butchering apprenticeship in Roediger Brothers Butchers on the main street of town. That was twelve years ago now. We live in Northam’s latest subdivision, on top of the hill, so we’ve got great views out over the valley.

Butchering takes up a lot of my time: Monday to Friday, and then Saturdays too. Going into Christmas time we’re basically seven days a week cooking hams. The best part of my job is talking to people. A lot of people come in wanting a chat; they might only buy half a kilo of mince or something, but they want to stay for ten minutes and have a chat about how they’re going. For some people, some older people, it’s the place they come to and have a chat, because we’re receptive to listening. My wife says I love talking to people and we’ve found, over the years, that we’ve developed lifetime friendships over the shop counter. I’m involved in a lot of community projects and organisations around town. I’m president of the Northam Country Club and I’m on the board of the Northam High School, the Chamber of Commerce and Northam Share and Care. If you belong to a club – or any organisation, it’s my belief that you should volunteer your time, because someone did it for you. There were people older than me in organisations that allowed me to play football, and golf, that looked after the clubs I joined.It’s just my part of giving back to the community, and it’s what I believe in. It’s getting harder and harder now for organisations to find people to go on boards and commit their time. Everyone says they’re time poor these days, but really I think if you want to do it,you’ll find time. When the chips are down around Northam, people put their hands up to help out; the community rallies together. I think that’s the best thing about Northam. The average person might not think too much about it, but when the farmers have had a good crop, or a good season,  the community feels good. I wouldn’t want to be a farmer. The pressure of relying on rain to make a living. Some farmers would say it’s like walking into a casino with a million dollars and playing two-up: either you’re going to win or you’re going to lose, and that’s the reality of farming. In our little Avon Valley, Northam, Goomalling, Bolgart and York area, it’s pretty consistent. I’ve never known us to have a really bad season. But as you go out further east and north, it can be heartbreaking. We have a few customers that come in  from Koorda, Mukinbudin, and  Southern Cross, and they tell you how bad it is, how dry, and you just bleed for them. But as an industry I think farming is going gangbusters.
Northam is far enough out of the city to call itself a country town, and close enough to the city to sort of call itself
a suburb, so you’ve got the best of both worlds. On a good spring day, when the canola’s out in the Avon Valley: yellow flowers stretching out across the other side of the valley, you can’t beat it. Or in winter, when the hot air balloons are floating around, the trees are flowering, the river’s flowing. There’s nowhere else to be.