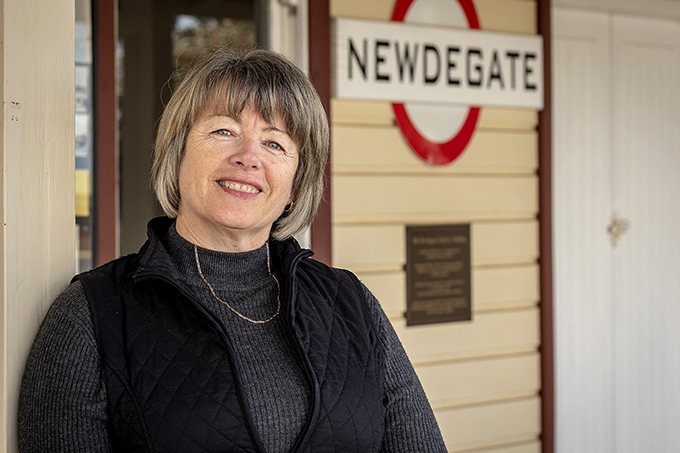 I grew up on a farm and went to school in the neighbouring community, Lake Grace, so it wasn’t a big change for me to come and live on the farm here in Newdegate when I married Russell. We’ve been married for thirty three years now. Both our families are farmers and both sets of grandparents were early settlers in the area. Our three children went to Newdegate Primary School before boarding school in Perth and they’re now all working, studying, or travelling. We farm cereals and sheep in the area of Buniche – which was originally a designated town site but was never developed. There was a CBH receival point, there until recent years. It was closed down several years ago like all of the smaller bins in the outer areas so we cart twenty six kilometres into Newdegate now.

Russell and I are farming together now that his parents have retired. We don’t employ backpackers like a lot of people do, but we do have family and friends that enjoy coming to live with and help us for seeding and harvest. It’s a bit of a party when they’re here actually. It’s a busy time so as well as preparing meals we girls help with putting out hay and grain to the sheep, checking the lambing ewes and moving sheep. We have three different properties, so we’ve got a bit of travelling in between them. I went to Business College in Perth after high school and did secretarial work there, and after I was married, came out to Newdegate and joined in the community here. I’ve been involved in the school magazine, the PNC, and now the Field Day committee. The committee is big and a lot of people are involved, but there’s a smaller group that are heavily involved all year round, and it’s really exciting to be part of that. I love the atmosphere of living here, living this country life in Newdegate. We have the best of both worlds: we can go and enjoy the city when we choose then escape back to the quiet of the country life. Newdegate is like a lot of small towns. But what I find most exciting is that people here are willing to stand up and work hard to make it better for their families. The town seems to have been blessed with generations of proactive locals pulling together funding to accomplish major improvements through the generations. Generations of them. The Machinery Field Days have been running for forty six years this year and it does bring an enormous amount of money back into the community, but bigger than that it unites the community to work together for a common purpose. There are some in the community that aren’t seen much all year, but they come in and do a few hours on roster at the Field Day and meet up with everybody again. That’s what it’s really all about; not so much putting new paint on poles, but bringing the community together for a common purpose, carrying on and adding to the work of previous generations, and it’s motivating. If the towns that are watching their residents leaving could find a similar cause, who knows, maybe that could be what encourages them to stay and be part of it all. You’ve got to join in with things or you could find living here lonely. Finding a way to be part of the community is important. But I think it  can often be adversity that galvanises people into action.

The Country Women’s Association all started as a gathering place and an opportunity for isolated country women to meet and socialise with others on shopping day. They eventually became a strong and respected organisation if the early days; instigating things like the white lines down the centre of the main roads, seatbelts on school buses. So, recently when there was talk that the Newdegate branch was going to close due to lack of members, some said “what? No! That can’t happen!’ and suddenly there was a rush of new members. Now the branch is up and running again. The social interaction, with cups of tea and sandwiches once a month to discuss current topics and ways to improve things is a mental health session for regional women. Newdegate is a good example of a community willing to support an idea and run with it – and I’m happy to be here and part of it.