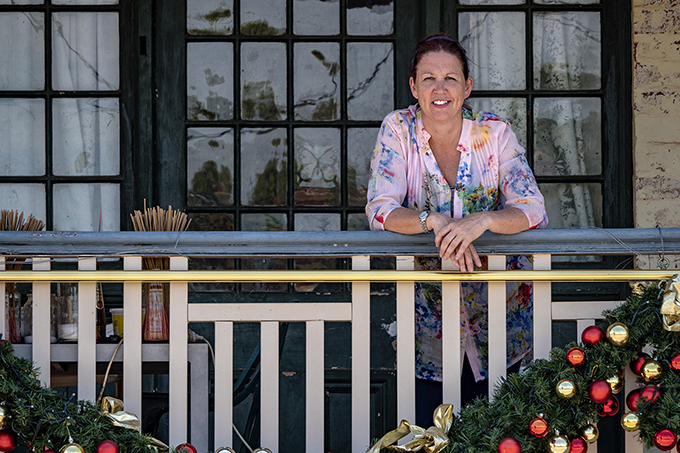 My husband and I were in York, running a family business, and we were looking for somewhere to move to when we saw The Grand in Northam. I fell in love with the staircase, and we just took a leap of faith. Originally, it had been a hotel, but it was a private residence when we bought it. It’s taken us two years to go through Shire approval to get it converted back to a hotel. My husband, Ken and I buy everything from Gumtree. We’ve got, at last count, ten chesterfield sofas. It’s that kind of place. We live upstairs with our six and eight year old. We’ve got fifteen rooms – which sounds fantastic but we’ve got fifteen tiny rooms that are probably the size of your bathroom. It’s got eight hundred square metres of lawn out the back and this old train carriage set up, and inside, it’s going to be the kind of place your kids can run around out the back while you have a chat with your friends. Before coming to Australia, I’d spent twenty years in Gloucestershire, which is the posh part, before you get to Bristol and they start talking like out of something like Hot Fuzz. I’ve actually been here longer than I’ve spent in the UK, but this accent isn’t going anywhere. When I was pretty new to town I bumped into an amazing woman, Jo Hill from Sportspower, who had a vision of creating a Northam Women in Business. She told me about it, and I went to a meeting, and I thought ‘wow!’ The group’s grown now to about seventy five different Women in Business who support each other, who network with each other, who collaborate and who are just there for each other. It’s a really exciting group to be part of. The Northam Chamber of Commerce saw what was going on, and groups like the Northam Chamber of Commerce can sometimes be seen as a little male, pale and stale. So a job for the Chamber came up, a newly created role, and I was already involved with Northam Business, and in my interview, I said ‘if you want the Chamber to be as popular and successful as Northam Women in Business, get me to do it, because I’ll make it happen’. So that’s how I became the chief enthusiasm officer for the Northam Chamber of Commerce. We just get a whole range of people coming in. I might get people coming in who want a referral: ‘where can I get my keys cut?’ ‘Oh, you want to go and talk to David or Geoff down the road’. I also do training in Social Media and Marketing, and we’ve just started a new Northam Buy Local group. I will never say never, but I don’t think I’ll ever go back to Perth and live. Really. It’s the community: I know people now that I’ve only known for two and a half years that would do anything for me. Anything! The sense of community here is incredible. I feel the friends that I’ve made here are almost family. They do things for me, they look after me and that’s what keeps me here. I also see a lot of potential in Northam. You see Aldi and other big businesses coming to town. They don’t just throw a dart at a map and decide ‘that’s where we’re going to go’. They do a lot of research for their investments, so, to me, something like Aldi coming to town is a good thing, not only in the short term with jobs, but as an indication of what’s coming for Northam. People complain about online stores but I think ‘well, great! You should be going online then!’ Yeah you’ve got a brick and mortar shop, but why shouldn’t you be doing online? You’ve got a post office there; create an online shop and then you could be joining that as well! If you can’t beat ‘em, join ‘em.