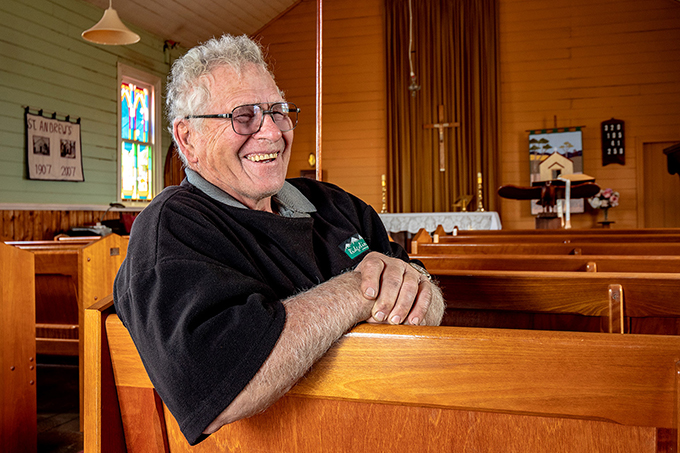 I was a farmer up until I was fifty one, and then I started chasing a different flock: I began studying for the priesthood. We were farming in Albany at the time, and I realised I couldn’t do both, so I put the place on the market. It sold, and within the week the Bishop rang me up and asked for my CV. “I want it in by Wednesday, Harold,” he said. I said “that’s not going to happen.” His reply was “haven’t you heard of a fax machine?” So that was that. I’d left school when I was fourteen, but I did the diploma and I was deaconed in 1999, and then priested in 2000. It’s been a big life change for my wife, Sue. She married a farmer, and ended up with a priest. My Mum and Dad had died by the time I was priested, and I said to one of Dad’s sisters, one of my aunties, “what do you think about having a priest in the family?” She said “well, you took long enough getting there.” And I thought “Oh! Okay, she must’ve known something I didn’t.” She said “I’m not surprised at all, I’m just surprised it took you this long to get there.”

I was never going to end up in a cathedral; too rough round the edges. You need someone fairly polished to be in the cathedral. So the fellow from the ministry panel interviewing me at the time, said “what would happen if we sent you to Ravensthorpe?” Which proves he didn’t have a good look at my application, otherwise he’d know I came from there! But I was sent out initially to Gnowangerup and then to a combined parish covering Jerramungup and Ravensthorpe for four years, before transferring to Ravensthorpe fulltime. And I’ve been here ever since. I was virtually being a priest to people I’d played sports with most of my life. And being built nice and petite like I am, I hadn’t exactly been gentle on the football field! It’s been wonderful, I’ve done weddings, and baptisms for their kids, and now I do baptisms for their kids’ kids. It’s a real privilege to have the role as a priest, and really enjoyable. It doesn’t matter what happens, there’s always a silver lining somewhere. You have a lot of fun too. Especially if they don’t know you’ve been an ex-farmer. In Gnowangerup, nobody knew I was an ex-farmer. So you’d go out and help on  the farm, and they’d just look at you and think “how do you know how to do that?”

Now I’m semi-retired, and living in Hopetoun. I’m doing the same things that I was doing before, but on a lesser scale. I still do the Sunday services, and I’m on call if anyone needs me for funerals or baptisms or weddings. The
church here has been around since 1907. And they’re still having services in there, and it’s got some of the most wonderful stained glass windows you’ve ever seen in your life. I’ve got two daughters: Tammy and Theresa. Theresa has recently been rediagnosed with cancer. She had breast cancer four years ago, and it’s reoccurred. Her husband’s her fulltime carer at the moment, so I’m helping out, doing sheep yards or things on the farm.
I think the best-kept secret in any country town is the camaraderie and friendship and the help that’s there to anyone that needs it. Everyone knows everyone. If anything happens, people rally together to help them. A young bloke broke his collarbone in the football grand final the other day. And the sporting community are all going to go out to do his crutching for him, because he can’t do it himself. You know, that sort of thing just wouldn’t happen in the city.

With the farms getting bigger, towns are struggling to fill sports teams. Sports seem to be what holds a lot of these communities together: to be able to come together on Saturdays for sports. But the beauty of the present is a lot of young farmers are taking over from their Dads at the moment and they’ve got their own kids now. So there are a lot of kids in the area. Over the years, I’ve been chaplain of the school. They all call me “Rev,” which is wonderful. Some of those kids were real rough little fellas, but you know, you walk down the street and these young blokes will yell out “hello Rev!” People will look at me in surprise and say “you’re a priest? I wouldn’t have thought so!” And i’ll say “what does a priest look like?”