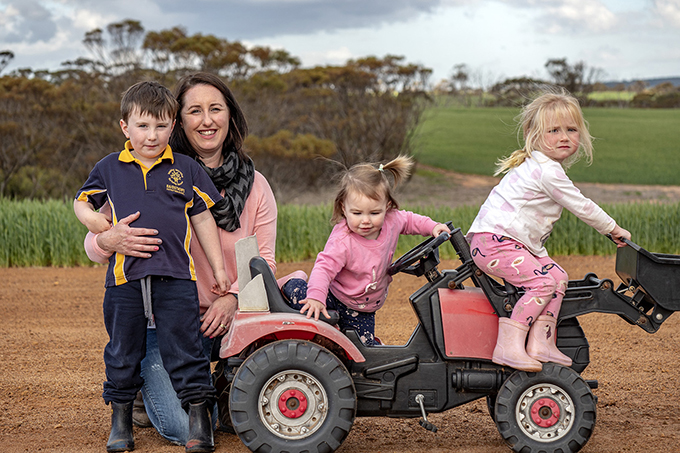 I first came to Ravensthorpe when I was twenty-two. I originally just came to town for a year to help my Dad out. He’s an earthworks contractor and had the tender to build the airport for the Ravensthorpe nickel mine. And then one night at the pub, he introduced me to my husband.

I was born in Mount Barker, grew up in Narrogin, and then studied engineering and surveying in Kalgoorlie. My husband grew up here. He’s a farmer, so when I married him, I moved out onto his family farm and I’ve lived there since. We farm twenty thousand acres north of Ravensthorpe. We have sheep, wheat, canola, barley, a few cows. I do the bookwork, or whatever’s necessary. We’ve got three children. So we’re busy with them, and I’m currently the Deputy Shire President. I wanted to represent the younger demographic. My husband grew up here, went away to school and he’s come back to the farm. There are a lot of other second generation farmers that are doing the same thing. They are coming back, they’re married, they’re having kids and they’re wanting to see things progress in their hometown.

My life here wasn’t really planned, it just sort of happened. It’s a bit testing sometimes. It’s a bit crazy: there’s lunches for the kids, Council emails and meetings, farm bookwork, and one day sort of rolls into the next. I remember first coming to town thinking “what am I doing?” We were driving down the main street, and I said to Dad “why would we do this?” He said, “I’ve got this big job; it’s a good place, and once you settle in you’ll be fine.” But I’d just come from the city and I was thinking: “where do you shop? Where do you even buy underwear?!” Now I don’t think I’d probably live anywhere else. It’s a pretty close-knit community. The winter sports is a good thing to get involved in, and you meet so many people from the surrounding towns of Lake King and Hopetoun. The towns, in one sense, progress with the mines. When BHP were here, they did a lot of development, and a lot of their workers lived in Hopetoun. It’s a bit similar with Galaxy; they try and push for their staff to live in Ravensthorpe so they can be part of the community. I think if the farmers weren’t here, this’d just be a pretty sleepy little town. It’s the farmers that have been here for a long time, and they support the local businesses, through the ups and downs of the mines, and do what they can.

When Galaxy shut down a few years back, it was just the locals that would be in the pub for the odd beer and a takeaway dinner on a Sunday night. It goes in waves, but I think the local people here are the backbone of town. We’re not really solely relying on the mines for business, which is good. It’s a pretty unique place in that you have agriculture bordering onto a mine site, and then the town site. Until you stay a while, you don’t actually realise how nice it can be here, and that’s what I found when I first came. You can’t judge a book by its cover in one sense, because you don’t really know until you settle in and get to know the character of the town: it’s the people that make the town. The wildflowers, the spring festival, the Ravensthorpe Range up Floater Road, the Archer Lookout, the beaches in Hopetoun, and the people.