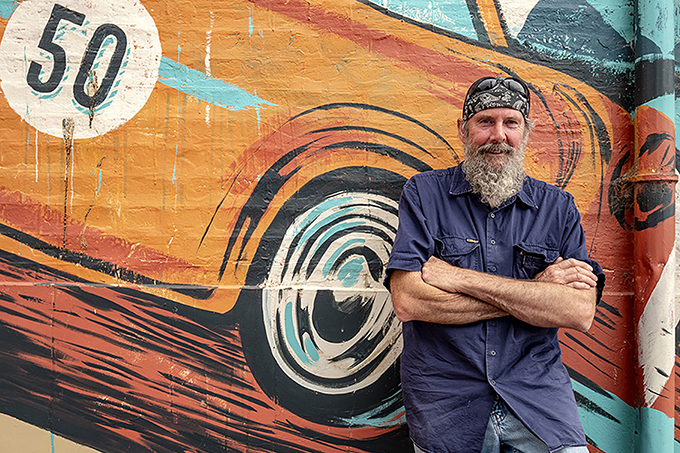 I’m born and bred in Northam, just like my parents. My great-grandfather came here and started a grocery store after World War I. I was born with acute scoliosis, curvature of the spine. I wasn’t supposed to ever do too much growing up. As a teenager, I used to get picked on a bit, because I wore a body brace every day. It was a horrible, uncomfortable, sweaty plastic thing. But I played a lot of cricket and badminton, and managed to get to Country State level in both sports as a junior. I played at the WACA, representing the WA Country 11, playing the Metro 11 and playing against Kim Hughes and Terry Alderman, cricketers that went on to play for Australia. I just used to take the brace off and play cricket, and put it back on again when I was finished.

Ultimately I went in for spinal surgery, which was cutting edge at the time, I was the first person in WA to undertake it. But the recovery was eight hours a day lying flat on your back, and then eight hours flat on your face, pinned, for three months. I got, as you would do, a little depressed. There was a terrific nurse there, and she said to me one day “I want you to meet some people.” She wheeled me around to the head injury unit at Shenton Park Hospital, and introduced me to people that were vegetables, basically, on life support. Then she walked me back and told me how fortunate I was that I’d probably make a full recovery, and I did, I made a very quick recovery after that.

I’ve had a number of different kinds of jobs. I lived away for a while, then came back to Northam in the seventies and worked for the Swan Brewery, and then the famous Trans Hotel, which had the biggest front bar in Western Australia at the time, and then The Grand. The hotel industry’s a great industry to work in from the other side of the bar. If you don’t drink, and you’re just pulling the pints, you can really learn a lot about people.

I had a really bad experience at the end of my hospitality years, I had a best friend who always used to come in for a few beers and a bit of pool but one particular night, after a few, he wanted his keys back to do a pub crawl. We had a pretty verbal argument, and he wanted to fight, so I threw him his keys and let him go. He died in a car accident that night. I felt pretty bad for a few years, and left the hotel industry after that. But you’ve got to move on from things. So eventually I did. I met a runaway from New Zealand, a wee Scottish lass from Dunedin. We’re still together, Joy and I, thirty something years, three kids, eight grandchildren, and two great grandchildren later.

At one stage there, Joy and I had a restaurant, a take-away lunch bar, and a hotel. Running all three at the same time, it was great fun but hard work. So I went and worked for Main Roads Western Australia. The noticeboard had courses advertised on it every day, for training and accreditations, and no-one ever did them. I still can’t understand why people wouldn’t take these offers up. After two years at Main Roads, I became a certified arborist. The State Government paid for all my training, all my accreditations, and I became the supervisor of the crew, much to the disgust of the guys that’d been there for ten years. I’ve since left Main Roads and set up our own business, which we contracted back to them on a ten year contract.

My back’s fine now, because I’ve worked hard to make it strong. But I’m not on the tools anymore, I’m an administrator and director of the business. Some of the guys I employ are former methamphetamine addicts or people who have had troubled backgrounds. The way I look at it, someone gave me a chance, so I like to pay it forward. If you can change somebody else’s life for the better it’s a good feeling. I guess a nice outcome from that was in 2013, when I was given the Premier’s Shire of Northam Australia Day Citizen of the year award for outstanding voluntary services to the community.

It’s funny how you follow your father’s footsteps. My father always had an interest in motorsport, always wanted to be a race car driver. I remember going to the Caversham race circuit with him as a kid. I raced go-karts for a long time. Now I’ve got a historic touring car, a 1965 Mark 1 Lotus Cortina, and I coordinate the Northam Round the Houses reenactment race. Throughout the fifties, before anyone invented OH&S, they used to race around the suburbs because WA didn’t have a purpose-built racetrack. They just used to block the roads, and put a couple of hay bales up against each lamppost and they raced around the towns. In 2019, we’ll celebrate twenty years re-enacting the Northam Flying Fifty. It’s evolved now into the Northam Motorsport Festival, with a hill climb at Mount Ommanney and a Motorkhana. Some of these are fifty five year old cars, and we’re making them go faster than they were ever designed for.

The beauty of the event is that the money stays local. Without that money, for example, we wouldn’t have the Northam Show. It’s a really cool thing, beccause you know you’re making a difference. And I’m just one bloke, there are a lot of other people doing a lot of really good things around town. That’s what I like about Northam, there’s a really good community, if you’re prepared to get in amongst it.