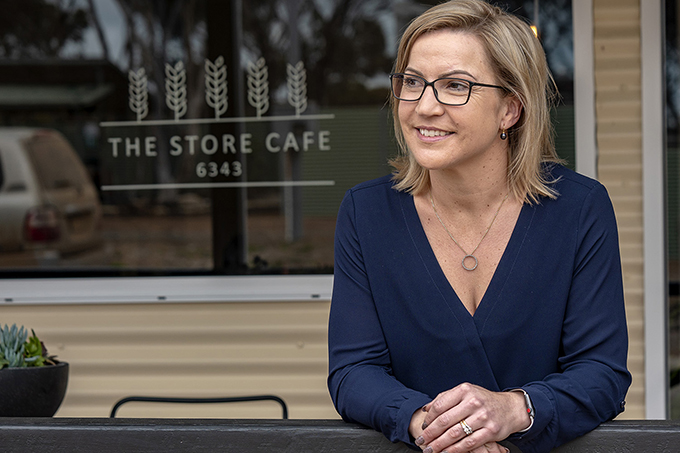 When I left Albany, my work colleagues said “you’ll go to Esperance, and you’ll find a farmer, and get married”, and I said “oh, no, I’m never going to marry a farmer!” Then I met Josh. He was an agronomist for Landmark, and he’d already committed, when I met him, to moving back to the farm. He’d already quit his job and he was moving within weeks. Our relationship was new and I had no idea where Pingrup was, but was willing to give the long distance thing a go for a while. Within six months I was transferring to Katanning to be closer, while continuing my career in the banking industry. That was sixteen years ago. Now, I help Josh manage the farm. We’re sixteen kilometres south of Pingrup, on the home farm Josh grew up on. We’ve been there thirteen years. We’re grain growers: wheat, barley, canola; farming about twenty two thousand acres over various lots. I do all the accounts and the wages; basically anything that’s office related is my part on the farm. Josh does everything that’s paddock related, and we have two great full time staff. I first got involved in the community playing local hockey. We used to have sport in town twice a year but when the courts deteriorated and were deemed unsafe to play on, all games were stopped. Pingrup had merged teams with Lake Grace for football, hockey and netball years ago, because they just didn’t have enough numbers on their own, but we would still get two home games every year. I remember thinking ‘this is our town, if we want to bring up kids here, we’ve got to fight for our sport.’So I joined the local Ground Improvement Committee and that was, I suppose, my first community project. We put together a grant to help get our courts resurfaced. We went from four broken-down old tennis courts to two multipurpose basketball, netball, and tennis courts. Combined sport returned and we’ve been able to host two games of sport in town ever since. There were some people in town that thought “everyone’s already left, what’s the point? We’re just wasting money.” But for the young people, and for me, we thought “well, I’m still here, I’ve still got kids to grow up here, it’s important to me.” You’ve got to stand up and fight for what’s important. Many farmers employ multiple staff, and who’s going to want to move here if you don’t have any facilities? So it’s kind of been a driver for me. I want to live here, I want my kids to live here, and enjoy it. I joined the Shire Council when I was thirty to be a voice for the younger families in town. I stayed on for two terms, eight years in total. I had two young kids at home when I started, and had another baby during my time there. My fellow Councillors were really accepting, and I’d just take her with  me to Council meetings. It was a really good experience and I think we achieved a lot. When I first moved  ere, we had such a big group of young people in their early twenties. We’ve sort of grown up together, and now our children are  growing up together. We were all part of the community, everybody got involved, because that’s what you do in a small community and that’s why the community is what it is. There are just less and less of those younger people coming through, I think. But we’re still working hard to improve things. I’ve been involved in the Community Resource Centre for over thirteen years which is well known now for its recent purchase and re-opening of our local café, now known as The Store Café 6343. It had been a privately run cafe, and it was such a meeting place for people until it closed at the start of 2018. We don’t have much out here. When the Government said they were going to cut our funding,Our Committee thought “let’s invest what we have saved back into our community and let our community benefit from this, and we can diversify.” But really, it’s just about giving back to the community. The café, it’s small, and it’s not going to make us a fortune, but it’s delivering a service to the community and it gives us a place to meet, and be a community. When FORM announced they were going to paint a mural on the silos, we thought “people are coming through our town, we need to give them a service!” If there’s any time it’s going to work, it’s going to be now. We need to tap into the tourism the silo trail will create. Many local businesses struggle in small towns, we need to work with any and all markets that we can. I’m here for my family. We run a successful business, we have a great life and we have good friends. Our community relies on many volunteers to provide services and maintain facilities. What we have is thanks to the efforts of many generations,
and people working together. That is what makes a community.