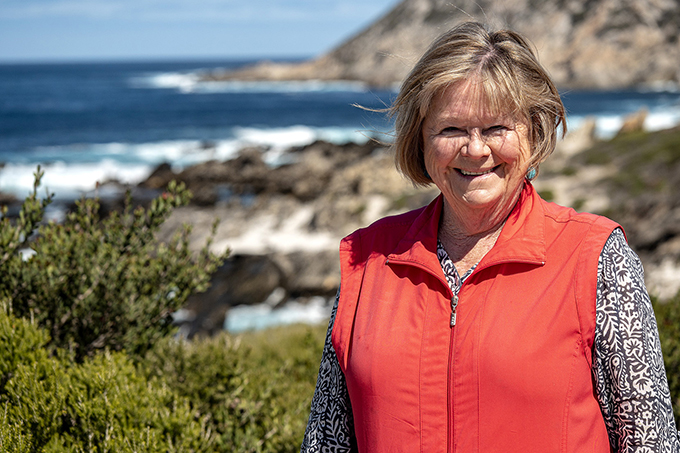 I live in a little tiny part of Hopetoun called Blue Vista. I’ve lived in the Hopetoun area since 2006. I originally came working for a real estate company that was contracted to BHP to manage the houses they were building in the town. I’ve a bit of a gypsy background; I was born in New South Wales and in 1976 moved to North-Western Australia, then on to Perth, Guildford, Roleystone and Mundaring. I adapt, just like the landscapes and I’ve done a huge amount of different things in my life. But I’ve always been into gardening.

I left school at a very early age, got married, had children, and then I went to study horticulture, because I knew that was exactly what I wanted to do. I had to go back to school when I was thirty, to be able to get into the college to study horticulture. Since then I’ve just done everything in horticulture that you could possibly think of. I moved into garden design, education advisory and shop displays. That work feels quite natural for me, I love it. I just love nature itself, regardless of what form that takes. Nature has really good design in itself, you can learn a lot from it. There’s always mass and void in nature; and that’s good design.

At the moment, I’m coordinating the Ravensthorpe Wildflower Show and Spring Festival. It’s been going for thirty seven years and I think this is the second or third year they’ve had a coordinator. It takes about a hundred and sixty people to put this festival together, and that’s all volunteers. But they also work all year on it, organising the event, collecting specimens for the herbarium and running plant identification courses.

When BHP officially opened the Ravensthorpe Nickel Operations (RNO) I created displays for the offical opening, and as part of the display I created a huge wreath of three hundred banksias. It took up a whole wall! After the opening I asked the Wildflower Show if they would like to display it at the festival. After that and every year since I have been creating a display, and that’s how I got involved. I’ve run other festivals here, I ran the Wings and Wheels Festival, which is nothing to do with plants: just anything that had wings or wheels. Once I finished with the real estate, BHP were looking for a community activities officer, so I took that on, basically working as a link between BHP and the community. I ran a summer festival for the Progress Association, and it was really quite an interesting time, and very exciting to be going forward. Then― bang!―The nickel price bottomed out and they closed the mine. Seven years to build it, and seven months to close it. The town was booming with people, and thousands of people lost their jobs overnight, all of them notified onsite at the same time.

That’s the ups and downs of this community. I look at it that farming goes up and down, they have good years and bad years; and when the farmers have two or three bad years, then the community is affected in some way. So farming is up and down, mining comes and goes, but wildflowers are here forever. People in communities adapt like the wildflowers do. You have to adapt. It was a big shock on 21 January, 2009, closing a mine like that overnight. It was hard to watch grown men cry. But good always comes out of bad. And the good thing that came out of it was that, BHP put five million dollars into a Futures Fund for the area. The State Government sealed the roads into the Fitzgerald River National Park to develop at least some type of ecotourism for the future. There are new houses in the towns, there’s a good power supply, a primary school. After BHP announced the RNO closure, every [school] assembly there was somebody leaving town. At one assembly, there were ten teachers and a hundred students that said farewell.

They say the town is ”boom and bust,” but I say the wildflowers are always here, the environment’s always here, and good comes out of bad, always. If the mining wasn’t here, a lot of the species of plants in the Fitzgerald Biosphere would never have been found, because before they can even dig any type of hole or put a peg in the ground, they have to do flora and fauna surveys.

The distance can be a challenge. If you do need anything major medically, you’ve got to leave town and go have it done. If I ran out of butter, it’s a thirty five kilometre round trip for me to get it. Isolation. In 2017, bridges and roads on the South Coast Highway were damaged by flood waters, cutting Ravensthorpe off from Albany and Esperance. Limited supplies were getting through and people were putting their kids into tinnies to get them to school. They’d cross to the road in the tinnie, climb up to the edge of the river on a rope, walk along through the mud, get into the other car and go to school or to get supplies.

For instance, in Ravensthorpe, there’s a young woman who’s going through her second bout of cancer. The family had to leave in a hurry for her treatment and they’ve got animals on their farm, and kids that had to go with them. So the whole community got together and people have been out there feeding the livestock, spraying their crops, doing all sorts for them. In one night, they raised $42,000 for them. One night and a little auction. That’s the power of community.