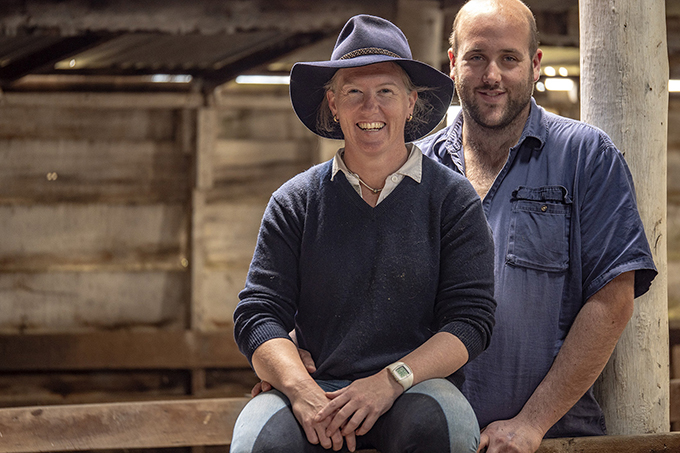 Trent: I’ve lived here all my life. My great-grandfather started farming in Pingrup, then my grandfather, then Dad took over and I’ve come back as well. We have a farm: half crop, half sheep. Our focus is Merino, mainly for wool and fibre, and we’ve started a trucking business as well. The trucking started four and a bit years ago, just as another income for our farm, responding to a need around the place. We do harvest and lime and fertiliser, a bit of wool and whatever else we can pick up, CBH work. It’s enough to keep us busy.

Suma: I work on the farm as well as doing administration for the business, the sheep enterprise is my thing. We have two kids, Duncan and Georgiana. I put them into daycare in Lake Grace. It’s a hundred and sixty kilometres a  ay to put them in daycare but it’s not fair to them for me to be dragging them around everywhere, because some things you need to do quickly and you can’t have the “Mum, can I get out too?” kind of conversation. So, I’m a regular working mum, just with a different office. I did my university studies in Victoria: Agricultural Science at University of Melbourne. I didn’t know what I wanted to do at the conclusion of my studies and there was a job going in Western Australia. I thought “well, Western Australia and Victoria are very, very different farming-wise. It’d be a good to broaden my horizons and see how other people do things.” Since coming out here then, I’ve progressed from working for someone to actually running my own business and my own sheep enterprise, which is  eally exciting. I started with five hundred sheep that I took on from a neighbour because they were really close to lambing and he couldn’t look after them. I sold those, bought my first lot of five hundred in, and I’ve now got five and a half thousand. So, in five years I’ve really started that from scratch. In the first year, I didn’t have enough money to buy rams, so I borrowed some. People were just so helpful and so generous. You can ring up anybody around this part of the world, and go “hey, I’ve got a question about this,” and they’re only too willing to share their knowledge.

Trent: We’ve found that with the trucking business as well. It’s been a pretty big gamble for us, but people here are willing to give someone that wants to have a go, a go rather than making you fight for it. Everyone’s giving you their business, because they want to support you, and it probably works out for them as well. As a small, local, family-based business, you’ve got the opportunity to prove that your service is good enough. I love what I do. It’s not work. It’s just what you do. Probably the best thing about what we do is, if we decide we want to go somewhere for the day, we’ll just go and do it. We don’t have to go and ask anyone for a day off. But as a business owner, its hard to attract staff.

Suma: I think from the outside, it looks like there’s nothing here. I suppose it’s the same with any small town. People tend to just drive through it, but anything you want, you can still get here, it’s just not as obvious as it would be if you were in a city. But the community is getting smaller. The farms have got bigger and they’re using less people. Around us now, I can count four families that have gone from the area in the last ten years, and the demographics are getting older. When I first came to WA, there were a lot of farmworkers around that mid-twenties age range, but they just don’t seem to be around anymore. Maybe because there are less jobs on farms for those type of people, or there are less people wanting those type of jobs. Workers are now are transient, they’re only coming for seeding and harvest. I think we’re at a critical point. Which way it goes from there: whether the town continues with less and less people, I don’t know. It’s just a shame. We’ve got the grave of William Carrie out in our paddock. The Carries were the first settlers to come out to Pingrup and this is their original farm. Carrie’s buried out the paddock with a headstone; and his mother-in-law right nextdoor. Rest in peace with your mother-in-law. The original house was rolled out twenty kilometres on logs with a team of horses. Trent’s grandfather, when he was a thirteen-year old, went out and marked his plot, and he lived in a twentythousand gallon tank on the creek. The dam just right next to it he dug by hand with a team of horses. You find me a thirteen-year old today that would go out and plot out their patch of dirt, and then start clearing it!

Trent: There’s a different kind of beauty out here. We’ve got a block that pretty much joins up to the actual Lake Grace itself, and when you’re out there you could be a million miles from anywhere. Lake Bryde doesn’t fill up like it used to, and not a lot of people know it’s there― it’s hidden off the main road―but it’s a freshwater dam that locals will go out to and do water sport. Our races, they’re on one of the last races on dirt tracks left in WA. Because there are only a few people here now, there are only so many people left to run things like the races, so it’s a pretty big effort to make it happen. But you can’t let it go, it’s the last big event we’ve got in town today. It’s so much better for the fact that we’ve all got in and made that happen together.

Suma: Living out here; you can see it as isolated, but it is what you make it. If you want it to be lonely, well, it’ll be lonely, but if you want to make it exciting, you get out and do something about it. We can’t go to the cinema every night, but we can go and catch yabbies in the dam. It’s just a different form of entertainment, and it’s more fun because you’ve got to do it yourself.