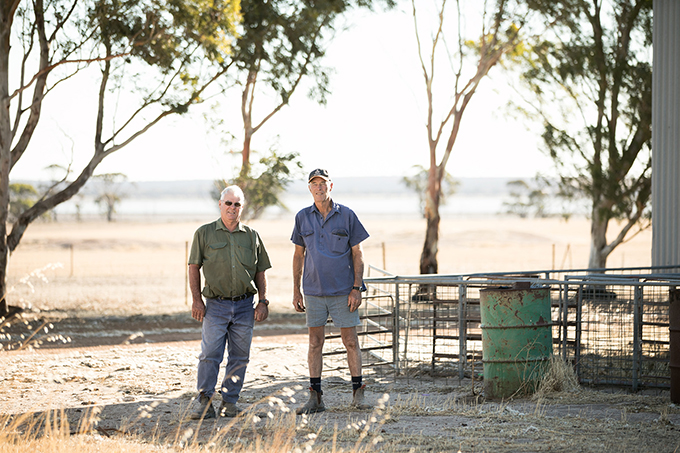 Bill: We’ve lived in Newdegate since we were born; sixty-seven years for me and sixty-eight for Tim. Tim’s father and my grandfather were brothers. There were four brothers that all came out to Newdegate in the 1920s, took up land, married and had families. We’re the only two families left here now, out of the four.

Tim: We’re about thirty kilometres North West of Newdegate, and Bill’s just out of town, five kilometres out. We’re farmers, but we’ve got sons that are probably more active at it than we are. I suppose we do as much as we can, but we’re getting to the stage where our boys need to be doing most of it, learning the most and proving to us that they can run it. But it’s handy for them to be able to draw on our experience, and in the busy times, because of the many years that we’ve done it, we know ahead of time what needs to happen.

Bill: Tim’s father passed away when he was twenty-one. Whereas when my father passed I was forty-five, so I had a bit more time to learn from him. The young blokes keep saying “the old fellas think they know everything.” But I said “one of these days, we’re not going to be here to give you that advice, and then you’ll realise how much we did know.” And you hear that in every family. And that knowledge is only something you can learn over time, you just can’t just bottle it all up in one year, because every season is different.

Tim: Everyone here farms grain and stock, ‘cos they fit well together. Grain. Sheep. It’s a mixed enterprise. Some have got cattle, but not many. Farming’s a way of life of course; you set your own milestones and even though they might take years and years and years to achieve, it’s a real… you know? Perhaps you might have an idea to do something new or innovative and you get a lot of satisfaction from that. Most farmers have never worked for more than a year or two for anybody else, and, as you can probably guess, it’s a lot better working for yourself. We think it is, anyway. Bill: Not every year’s a winner, and it’s a commitment; you can’t shortcut it. You can’t chop and change in one year. If it’s got to be done, it’s got to be done. Sometimes, it isn’t profitable. Often you’ve got all that behind you that you’ve done in previous years, you build it up and you can’t just abandon it though at times, you’d like to. If it’s a very late start and not much rain, you’ve just got to continue feeding. And you know that there’s going to be a loss out of all this, but you can’t stop.

Tim: I think if you were the only onethat was doing it, you’d probably stop. But everybody―all your friends and neighbours, and a lot of other people that you know around the place―they’re all doing the same thing. They’ve all got the same problems. You’re in it together.

Bill: There’s always something to do on a farm. You could make it a seven-day a- week job. It’s not hard physically like it used to be, but we do the hours; you’ve got to put the hours in. We probably spend, on average, a day a week in the office, and that’s something that’s gradually come upon us, you know, from thirty, forty, fifty years ago. Tim: It’s not for everybody. In our time we’ve seen quite a few instances where the only son or the eldest son has come back to the farm, because that was what was expected of him. Probably no real pressure on that he had to, but it was just what happened. And often they left because they weren’t cut out for it; they went broke or they just got disheartened. Everybody knows about how many people there used to be farming and how few there are now, but part of it is a lot of those people probably shouldn’t even have started farming. That’s just how it was in those days.

Bill: For young people growing up on a farm, there’s motorbikes, and horses and driving around in cars, and this is all before they’re ten years old. You go out shooting and all that sort of thing and it’s pretty attractive if you’re that way inclined. But now, most parents are sending their kids off for an apprenticeship or a degree before they come back. You could say it gives the young folk a chance to see what the other side’s like. I think it’s good, because you’re much less likely to get people farming that perhaps would’ve been better doing something else.

Tim: Many people marry the farmer one or two districts away. They’re probably the same kids when it comes down to it. You sort of know the worst of someone when you’ve been neighbours your whole life. Because you play sport with them, you’re at school with them, you’re on the same school bus.

Bill: I suppose the lack of services is the tough thing out here. We’re pretty used to it, but health services … I don’t think we’ve ever, in the last fifty years, had a doctor that’s lasted more than three years. And education’s non-existent once you’re past Year Six. There are very few people in the district -―a couple of hundred in Newdegate―- and we’d be the oldest, bar about three or four. As farms get bigger you buy the neighbour out, and there’s a vacant house and no-one’s living in it. Once people get to a certain age they either move to the coast or they retire, or they find that they’ve just got to move closer to a doctor. I always said I wouldn’t go unless, medically, I had to. I’m not ready yet anyway.

Tim: Volunteering; you know,―we never thought that was anything special. It’s sort of like a new word that’s turned up in the last ten years or so. It’s something that’s just normal for us. But people from outside, from the city, they can’t comprehend that. If there’s a local footy game, there’d be thirty different plates of something: everybody brings a plate. When there’s a funeral in town, same thing happens, there’s a huge spread. No-one ever asks, it just comes. I think most small country towns would be the same. It’s not necessarily a secret, that’s country living.

Bill: The community is that small that if you’re in a sporting club or any other organisation, you really need everybody to turn up and be part of it. So if you don’t like someone or they’re not your type, it doesn’t matter, you’ve got to put up with them. You’ve got to interact with those people, because the club wouldn’t survive otherwise. A lot of the things that happen here in Newdegate perhaps wouldn’t happen if the town was twice the size. But then if it got bigger again, it wouldn’t matter, because there’d be plenty of people to run a footy club or organise a Field Day or whatever. And even if you only used half the people, there’d still be enough. And that’s something I always thought makes Newdegate a little bit unique.