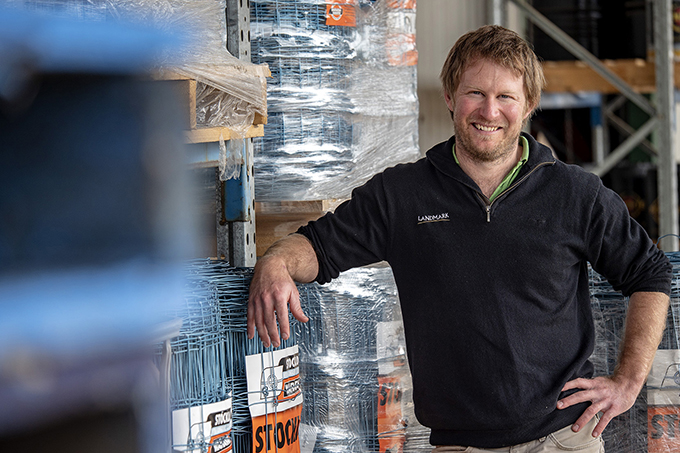 Ravensthorpe has always been home to me. I was born and bred out at West River, which is a farming region sixty kilometres west. I grew up here, went to primary school here, and then went away for boarding school and university in Perth. I did a few jobs around the place after that, and then my wife and I moved back here in 2015. I was pretty stoked to be able to come back, settle here and raise a family. Having three small kids, you start your day pretty early. I’ve got three girls, so I’m pretty outnumbered at home, I won’t win too many arguments.

Originally, my family moved out to West River on a conditional purchase block, which was basically all bush, and farmers had to clear it from scratch. My father started that in the mid-1970s, living out of a caravan. My Mum was actually raised in Papua New Guinea; my pop was there working as an agronomist with the Commonwealth. She went to private school in Sydney, and then teacher’s college in Perth, and then she got a posting to Ravensthorpe, where she met my Dad.

When they married they lived in a twobedroom asbestos shack in West River with no power or running water. The progression backwards in her life was pretty strong, and it’s pretty amazing that she stayed around. When she was a schoolteacher, doing her schoolwork and marking reports, Dad would pull the old HR ute up to the outside of the house and then run a lead from the battery of the ute into the house so that she could have lighting to do her schoolwork. I just think it’s phenomenal she decided to stay around. It’s lucky she did, because she had three kids, of which I was one. Our generation’s got it easy by comparison!

I work for Landmark. We service the agricultural regions around, supplying everything farmers need: chemical, fertiliser, fencing equipment all sorts of farm supplies. I’m glad to be able to be in an industry that I love. Outside of work I wear a few different hats. I’m very involved in sport, and pretty passionate about the sustainability of sporting in the area. I’m the president of the Football Association, and I’ve coached the senior footy team for a couple of years. I’m also the treasurer of the Tigers Football Club. My wife Gabby’s pretty involved as well, and helps me out a fair bit with all the administration. That takes up a fair bit of our winter. We work hard to keep sport going: football, netball, and hockey. Sport in all country regions has probably been on the decline for the last three decades. In Ravensthorpe we were originally a five-team footy comp, in the 1960s. By the 1980s we were down to three. Now we’re down to two teams. We can’t drop to one team and if you look at other towns around that have lost their footy clubs, once they go they don’t get them back.

I got on the Shire Council last year. I just wanted to contribute and give something back to the community, try to change things in a positive way. I was busy enough before that, but I sort of just decided that there was never going to be a good time, and I should just take it on now while I had the opportunity. It’s certainly a learning curve that’s never ending. But I’m enjoying it. I’m feeling my way through it alright! Because it is a small population, if you want to sink your teeth in and have a go, it can really have a positive effect pretty quickly.

We’ve had a very rocky road with mining, and mines coming and going. But at the moment, the Galaxy mine north of town is going really well, and they are definitely contributing to Hopetoun and Ravensthorpe’s population and prosperity. We were sort of made famous in 2008 by a big BHP Billiton nickel mine to the east of town that closed. It shut down during the global financial crisis. It reopened and then closed again a couple of years back. That was tough on Hopetoun, but there’s talk of that reopening next year. I think we’ve all learnt from mining that it’s sort of fickle, and you just take the good times when they’re there, but don’t get too used to them. Our really core population is involved in agriculture and tourism and it’s tracking ok.

Agriculture has probably gone from strength to strength in the last thirty years, since I’ve been in the area. My father said when he came here it was just a single lane bitumen strip down the middle of town, and dirt car parking, and it looked like the Wild West. But the town’s come along. We’re pretty fortunate to live where we do. We’ve got an awesome coastline, Fitzgerald River National Park and heaps of bush. We’ve got the ranges and the wildflowers, and an environment you don’t get anywhere else. We’re looking forward to being here for the foreseeable future. When our kids get to high school we’d like them to go to a bigger school, but we’ll cross that  bridge when we come to it.