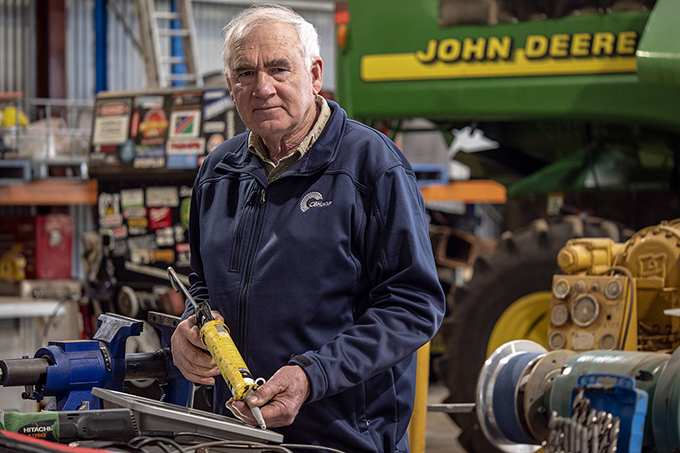 I’ve spent most of my time in Newdegate. I’ve been here seventy years, basically. My grandfather had a thousand acres when he came out as a pioneer in 1922. My father built it up to about five thousand acres, and between myself and my brother, we’ve brought it to about seventy thousand. When my grandfather came back as a returned soldier from the First World War, he was able to get an allocation at Newdegate. He’d tell us how he walked around through the bush to find survey pegs that marked out his allocation. They actually got lost on the first night and had to sleep in the bush waiting for the sun to come up and show them where they were. There was no one out here then, it was just bush, right through to the south coast. They lived in a little humpy made out of bags initially. My father took over from my grandfather around 1950 and in the 1960s set up a cleaning shed for cleaning the clover we and others harvested.

I’ve had time away from the farm. Cooperative Bulk Handling (CBH) work has taken me away over the last few years and if we had a drought or a slack period, we used to use our equipment to go and do contract work on other farms down around Hopetoun and Esperance way. As a young fellow, I spent a year doing survey work around Kalgoorlie and did my commercial pilot’s licence down at Midland Tech. I thought “well, I don’t need to do senior high school, I’ll go to agriculture school.” I went to the Narrogin College of Agriculture for two years, and then I came home, worked on the farm and did my private pilot licence. I wanted to be a crop dusting pilot. I reckoned that appealed to me, flying around at low level. I could never get my grandmother to fly, ever, but in 1971 while I was studying for my commercial licence and doing survey work my mother, my sister and my grandmother came down to Perth and we all went out to the Northam Air Show. They had what they called the Women’s Fly-Past. A young girl from Narrogin, Bev Jeffries, who I knew really well, she and my mother were in the Fly-Past and they convinced my grandmother to go up with them. I don’t know how they managed that. They only had what you call a restricted pilot’s licence, which meant they could only fly within twenty kilometres of where they took off. Because they hadn’t yet learned navigation. Anyway, that wasn’t a good day, because they took off following another plane, and they couldn’t take off in that same distance. They ploughed the aircraft into the deck, and they were all killed. That was the end of my surveying and off the- farm work. I’d had intentions of going to Papua New Guinea and flying. I always had intentions of coming back, but just wanted to do something a bit more exciting than sitting in a clovercleaning shed twenty four / seven. Following the accident I came home and I’ve been here ever since. That was a pretty tough time, but you survive. After ten years, you’ll go a day where you don’t think about it. Unless you talk about it with others. Then you remember it just like it was yesterday.

My father was running the clover-cleaning shed and my younger brother was still at school when the accident happened. So I  ook the farm on. I must’ve been about twenty-five. I had to buy the farm off my father. I had twenty years to pay for it and I didn’t have to pay any interest, which is probably a good thing, but I had to pay more than what the market rate was. At the time, it was about eighty dollars an acre, and I paid a hundred and four. I thought twenty years was like an eternity, and it’d never come, but twenty years goes real quick. And during that time, I built the farm up from five thousand acres to what it is today. We’ve have sheep on the farm, there are between eight and twelve thousand, and then we grow wheat, oats, barley, canola, a little bit of small seeds: Santorini, which is a type of a clover that puts nitrogen in the soil and is good sheep feed as well. My eldest boy Craig is out on one of the farms 50 kilometers north east of here. I’ve two girls: Nicole and Stacey, and then Charlie, he’s the youngest, and he runs the farm here. I still do the books, and if I get time I spend it mainly in the workshop, however I don’t get much time being tied up with CBH.

You need about twenty thousand acres now, to make a living in this area, whereas my grandfather could do that off about a thousand. Food’s incredibly cheap, compared to what it was back in 1922 when they had to do it all with horses. Technology has really made it very competitive, and it’s getting even more competitive now, with the Russians and the Ukrainians producing grain really cheaply. Nowadays that’s what sets the price of grain. It’s supply and demand. I just put my head down and my backside up and worked to pay my farm off, and tried to work smart. Eventually you get to a point where you’ve paid the farm off, and you can put a bit back into your community. I got conned by members of the community into putting my hand up for a vacant Shire Councillor position. Usually in local government in rural towns, that’s how it happens, you don’t put your hand up; someone grabs you and says “you’re the guy, we want you in there.” So that’s what happened, and I did local government for sixteen years. Then our local member on CBH stepped down. It was right at the time of the corporatisation of CBH in 2000; they wanted to privatise it and sell it off to the multinationals. All the old growers remember the 1930s when the grain wasn’t worth as much as the bag that it was in and they were absolutely exploited by the multinationals. So they drilled it into all of us that CBH had to be grower owned and grower  controlled and never forget it. We needed a mandate from the growers to maintain the co-operative. So another grower, David McDonald and I both ran on the same campaign to retain the co-op as it was, and we’d agreed whoever won would help the other guy. I scored about twelve more votes, so that’s what happened.

The first meeting I went to, I was like an ice-cream: they all wanted a piece of me, to get me on side. But I’d been on local government long enough to know what was going on, so I said “show me the money. Show me how this sale is  going to be sustainable and put more dollars in the bank of the growers.” And they couldn’t. So I said “well, you’ve got the wrong bloke if you want me to support that.” I said “I’m not going to vote for something that’s going to cost the growers more money with less service.” By the second and third board meeting, suddenly I was like the fly-blown sheep. No-one wanted  to know me. We put up the “no” case and it was successful. It wasn’t how clever I was, it was how clever all my contacts were, and how we fitted it all together to present the “no” case for growers. Because without our co-op, probably a third of the growers couldn’t be growing grain, they just wouldn’t be able to make enough money out of it. Anyway, I’ve been on the board ever since. 1937 was when Newdegate had its first CBH facility. In 1930 when the grain was worth virtually nothing when the bag was worth more than the grain they went from grain bags to bulk handling. That’s what forced the growers to form CBH. The growers, from that point in  1933 onwards, when they took their bags in, they’d tip it into an elevator and it’d be stored in bulk, and then it would be railed in bulk. It got rid of all the bags, and gave control of a part of the supply chain to growers that they didn’t previously have. CBH has grown from that point on. We have four ports; Esperance, Albany, Kwinana and Geraldton. Building Kwinana terminal was the biggest loan that’d ever been raised in the history of Australia when it was constructed. The Premier at the time was Sir Charles Court, who was an accountant and a really smart guy. CBH were a trading coop  totally owned by the growers at the time, so if they made some money they’d pay a dividend on shares. Sir Charles  Court said “well, you guys need to change the structure of your organisation so that you’re a non-trading co-op” like  the South Australian Cooperative at that time. So in 1977 we went from a trading co-op to a non-trading co-op so we have tax, and rates exemptiobns, and at that time water exemptions, the same as any other not-for-profit entity which helped pay back the massive loan required to build Kwinana. The Newdegate Machinery Field Day has  been significant for the town. Newdegate Jaycees were looking for  ideas to raise money, and Dowerin’s Field Day had been going about five years, so I and a couple of other guys went up to Dowerin to see how they ran their field day, using their  ideas and the size of their display blocks. From the research on how they operated,  we had the very first Newdegate Field Day in 1973, with twelve exhibitors. from that point on it just went ahead in leaps and bounds, there were huge amounts of land being cleared with the last land releases being in 1983. From a little tiny Field Day, we became the second biggest Field Day in Western Australia after Dowerin. Last  year they had close to fifteen thousand people over two days, which, for a small community of about two hundred is pretty significant. The good thing about farming: you have a lot of skills, but you’re master of none. You’re doing mechanics, hydraulics, and auto-electrics. If I had to be a mechanic every day, I’d get sick of that, but I love  doing it, because I only do it for a while. I like fixing machinery up, so I now have a really good workshop. It’s taken me fifty years to build, because I always had higher priorities like more land or new machinery, but we finally got the  workshop built in 2012. We thought it was perfect; we designed it to take our biggest machines. However since then we have bought a bigger truck rig, so it’s not quite big enough again.